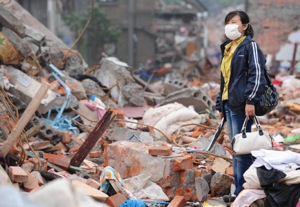 A quake survivor standing amid a massive pile of rubble in southwest China's quake-stricken Sichuan province. The strongest aftershock since the massive May 12 quake jolted China causing residents in some cities to flee buildings in fear of the 6.4 magnitude tremor. (FREDERIC J. BROWN/AFP/Getty Images)
China

BEICHUAN – A strong aftershock jolted southwest China on Sunday killing at least one person and injuring 400 others, state media said, nearly a fortnight after a big earthquake killed tens of thousands in the same area.

A local official in Guangyuan county said one person was killed and 24 hurt in collapsed houses or landslides, Xinhua state news agency reported.

Almost all of Qingchuan's houses had been declared unsafe after a devastating earthquake on May 12, and residents had moved into tents on the fringes of town. A mountain slope abutting the town had shown a crack, leading to fears it could smother part of the city in a landslide.

One of Sichuan's worrisome “quake lakes”, formed when landslides block a river, is also near the aftershock's epicentre in Hongguang.

As the aftershock occurred, hundreds of troops carrying explosives were trekking to reach another, even larger quake lake that threatened a secondary disaster.

Concerned by a steep rise in the water level of a giant lake at Tangjiashan on the Jian River, authorities want to blast a hole in the barrier before it bursts and causes a flash flood. Thousands below the lake have been evacuated as a precaution.

“I can assure the people who need to be moved have already been safely relocated,” said a general, who gave his name only as Zhou, watching over hundreds of troops outside the wrecked town of Beichuan as they readied to march to the lake.

Premier Wen Jiabao, who believes the overall death toll from the May 12 quake could exceed 80,000, has said the main concerns are secondary disasters like flooding and landslides, epidemics, and providing shelter for the 5 million displaced.

Hundreds of aftershocks have rattled the area since the 7.9 magnitude quake.

State television earlier reported that an 80-year-old partially paralysed man was pulled alive from the rubble on Friday, 266 hours after the main quake hit.

The man was rescued in Mianzhu city, where he had been trapped under a collapsed pillar of his house. He had survived after being fed by his wife, the television report said.

In the last century about 5,500 people were killed by flash floods after barrier lakes burst through dams made by landslides, according to a 2004 paper by geologists at the Chinese Academy of Sciences. In 1786, the breach of a landslide dam 10 days after a major earthquake killed about 100,000 people in Sichuan province.

The mountainous region along the faultline is densely packed dams, raising concerns that if either the quake lakes or the weakened dams burst, the rush of water could cause other dams to fail.

The Tangjiashan quake lake, one of dozens formed by this month's earthquake, rose 1.93 metres on Saturday to 723 metres, Xinhua said.

“The relief work for Tangjiashan quake lake is now at critical stage,” Vice Minister of Water Resource E Jingping told a news conference in Beijing. “The daunting difficulty in treating a quake lake is its unpredictability — its formation and when it could burst.”

General Zhou said the Tangjiashan lake was formed by a mudslide.

Heavy rain and high winds were forecast for the area on Sunday and Monday.

State media reported that fog had prevented the airlift of personnel and equipment to the lake, and that more than 1,500 soldiers were now going by foot. Each soldier was carrying 10 kg of explosives, Xinhua said.

China has also asked for help from a Russian helicopter, that can transport heavy equipment weighing 15 tonnes.

The lake is just 3.2 km upstream from Beichuan, a town so badly hit that it will be rebuilt in a new location and the ruins of collapsed buildings left as a quake memorial.

China has a window of about one month before the rainy season begins in Sichuan and must use the “precious time” to shore up as many dams as possible, E said.

He said 20,000 people had been evacuated from areas threatened by 19 quake lakes.

Despite assurances from authorities that any controlled water release would be safe, farmers said they were worried.

“At night-time you can hear the rumbling from the landslides around here and sometimes the earth shakes,” said Yang Daifu, 70, a farmer from Nongwan village, which was nearly completely wiped out in the earthquake.

“We see the water is rising as well, so we still feel threatened here,” said Yang, who now lives in one of tens of thousands of state-issued blue tents a few kilometres from his old home. ($1=6.941 Yuan)