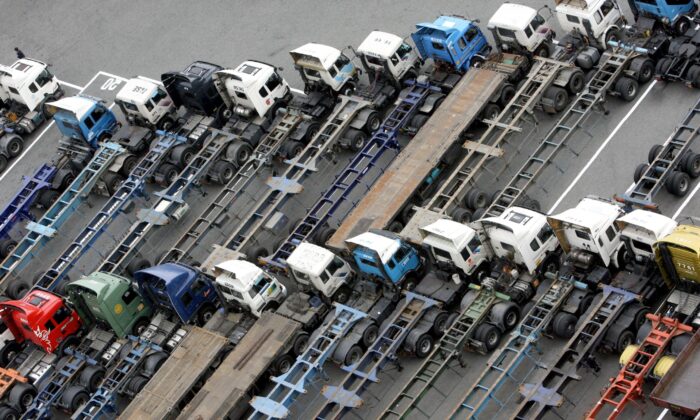 The strike has cost the economy an estimated $1.2 billion
By Reuters

SEOUL—Striking South Korean truckers are considering blocking shipments of coal to a power plant if the government rejects their demands for minimum pay guarantees, a senior trade union official said on Monday.

The Cargo Truckers Solidarity Union, on strike for a seventh day, is weighing several options to press its demands, including stopping coal to generate electricity and shutting down petrochemical complexes by blocking their shipments in and out.

“We are thinking of a complete blockade,” union leader Kim Jae-gwang told Reuters, referring to coal shipments to a power plant in Gunsan, North Jeolla Province that he did not name, which uses trucks for its coal.

“But we hope such a situation doesn’t happen.”

The impact of a blockade of the power plant would be limited in terms of national electricity output, even in the high-demand summer, but would mark a significant intensification of the truckers’ action.

The strike has cost key industrial sectors more than $1.2 billion in lost production and unfilled deliveries, the government estimated on Monday, as the damage spreads deeper through Asia’s fourth-largest economy.

The union is protesting against soaring fuel prices and demanding minimum pay guarantees. Four rounds of negotiations with the government have failed to find a compromise.

Some 7,050 people, or about 32 percent of union members, were striking on Monday, according to an updated transport ministry estimate. The ministry said in a statement it plans to continue talks with the union to resolve the situation.

Kim said his members were for now letting some movement of traffic to prevent the shutdown of petrochemical facilities, which would cost a lot of time and money to restart, but the union would “reconsider” that if the government did not show willingness to negotiate.

On Monday, South Korea’s new conservative president Yoon Suk-yeol called for ways to reduce the impact of the strike on industry. A transport ministry official said no new meeting with the union was scheduled.

The strike has forced steelmaker POSCO to shut some plants because of a lack of space to store finished products.

It also caused manufacturing losses of 5,400 vehicles for South Korean automakers between June 8–11, according to the Korea Automobile Manufacturers Association, with Hyundai Motor cutting production for some assembly lines. Cement makers have also reduced output.

The strike has disrupted shipments to China of a key material used in the production of semiconductors, the Korean International Trade Association (KITA) said on Tuesday.

It is the first concrete sign that the week-long strike is impacting the global supply chain of chip production.

KITA said a Korean company that produces isopropyl alcohol (IPA), a raw material for cleaning chip wafers, is facing complications in shipping to a Chinese company that in turn supplies wafers to chipmakers.

KITA said in a statement that about 90 tonnes, or a week’s worth of shipments have been delayed.

KITA corrected an earlier statement saying production had been disrupted. It clarified that the Chinese company does not supply wafers to Samsung Electronics Co. Ltd.’s chip production in China.

Samsung Electronics did not immediately comment. It produces NAND flash memory chips, used for data storage in data centers, smartphones, and other tech gadgets, at its plant in Xi’an, China.

The trucker union said in a statement on Tuesday it will continue its general strike and condemned the transport ministry for being “neither willing to talk nor capable of resolving the current situation.”

Two petrochemical industry sources, who declined to be identified, told Reuters that although naphtha crackers are still running at previous rates, some companies may be forced to halt them as soon as later this week if the situation continues.