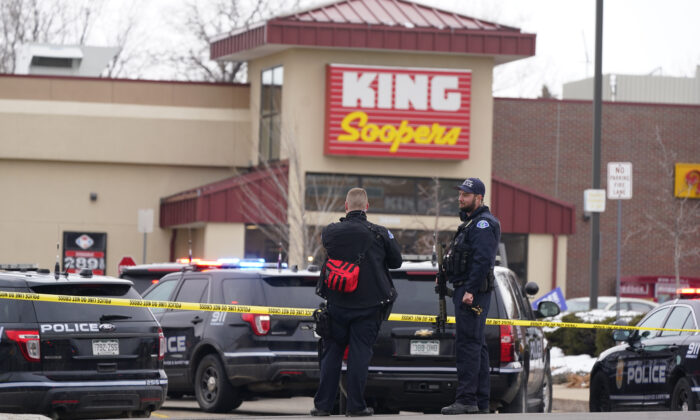 Police work on the scene outside of a King Soopers grocery store where a shooting took place in Boulder, Colo., on March 22, 2021. (David Zalubowski/AP Photo)
Companies

King Soopers and employees represented by United Food and Commercial Workers Local 7 announced on Jan. 21 that they have reached a tentative three-year agreement on a new collective bargaining agreement, ending the 10 day strike at the Colorado grocery chain.

King Soopers, the local chain of the Kroger supermarket giant, faced a walkout from more than 8,000 workers at 78 Denver metro area stores.

The three-year deal still needs to be ratified and the union said that details of the contract would be made public after the union members begin making their final votes starting on Jan. 24.

The union announced that workers are expected to start leaving the picket lines today.

“You have seven days to return to work. Contact your store manager to be placed on the schedule,” the union wrote to its members on Twitter.

“After months of negotiations and after our members walked out on strike, we have reached a tentative agreement with King Soopers/City Market that addresses the Company’s unfair labor practices and ensures that our members will receive the respect, pay, and protection they warrant,” said Kim Cordova, president of UFCW Local 7.

“This fight will always be about the workers. I could not be prouder of our members who put it all on the line to have their voices heard.”

“We are pleased that this agreement allows us to put more money in our associates’ paychecks and secures healthcare and pension plans.” said Joe Kelley, President of King Soopers and City Market.

“We look forward to welcoming back our associates and customers.”

King Sooper employees went on strike on Jan. 12 after rejecting at least two offers from the grocery chain.

The workers had complained about what they deemed years of unfair labor practices by King Soopers during the months of negotiations.

The union criticized the grocery chain for using third-party staffing agencies to do union-covered work.

It also called for better wages, health care benefits, security in the stores, restoration of pandemic hazard pay and an end to a two-tier pay structure for employees hired after 2005.

The union had earlier rejected a $170 million offer made last week by Kroger, which said was its “last, best and final offer.”

The store proposed wage increases of up to $4.50 per hour depending on job classification and tenure, with the starting rate of pay increased to $16 per hour, merely 13 cents above Denver’s minimum wage.

The union in response, demanded a raise of at least $6 per hour for every employee.

It proposed a starting pay of $18.56 an hour and provision for a faster pathway for part-time employees to become full-time.

More than 70 percent of the workers are part-time, according to the union.

The pandemic and rising inflation have pushed many American workers to demand better working conditions and higher pay.

The parent company, Kroger had accused the union of refusing to bargain in good faith, while the union alleged a few King Soopers representatives displayed “unprofessional” and “outrageous” behavior.

King Soopers won a temporary restraining order against the striking employees this week with a U.S. court ruling that prohibited picketing workers from gathering in groups of over 10 people and from interfering with anyone within 20 feet of another individual or standing in front of store entrances or vehicles.

“All of us at Local 7 are proud to fight on behalf of our members who show up to work every day, keeping shelves full to feed their communities through this ongoing pandemic while barely making ends meet to feed and provide for their own families. We didn’t ask for this fight, but the Company chose to put profits over people for so long and failed to listen to the workers who made its success possible,” Cordova said in her statement in the union’s press release.

“Now, our members have the contracts they deserve and can be proud of.

“This would not have been possible without the support of our allies throughout Colorado and across the country. To those who supported our members by honoring the picket line and showing up in solidarity, we thank you from the bottom of our hearts.”

The union’s contracts with other King Soopers and City Market stores across Colorado will soon expire.

It still is not clear how the new agreement covering Denver-area stores will affect them.