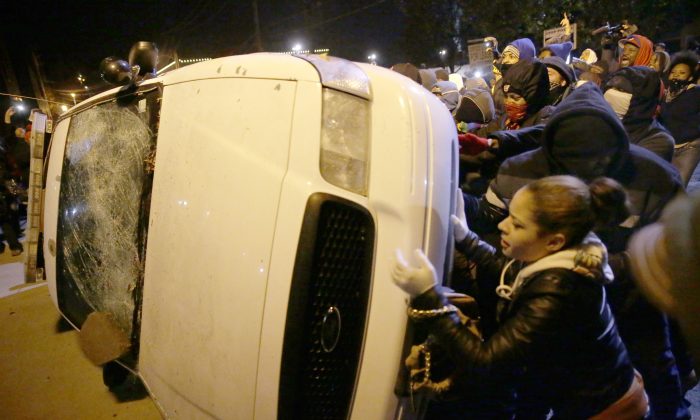 Protesters vandalize a police vehicle outside of the Ferguson city hall in Tuesday, Nov. 25, 2014, in Ferguson, Mo. Missouri's governor ordered hundreds more state militia into Ferguson on Tuesday, after a night of protests and rioting over a grand jury's decision not to indict police officer Darren Wilson in the fatal shooting of Michael Brown, a case that has inflamed racial tensions in the U.S. (AP Photo/David Goldman)
Ferguson

Wilson, 28, is the police officer who killed black teenager Michael Brown in the Missouri town. He was not indicted by the grand jury, and has been the subject of death threats.

In a piece that revealed Wilson was married to fellow officer Barbara Spradling last month, the paper included the couple’s street name.

That would be Manda Lane in Crestwood, a St. Louis suburb that’s about 30 minutes from Ferguson.

A number of people and outlets ripped into the paper for revealing the street, which originally also included a picture of the home.

“If anything happens to that man, that family, or his home, the culpability is with them,” said Fox News analyst Sean Hannity.

The street is only two blocks long and the house number can now reportedly be easily located online.

“I hope he sues you. You are the worst media slime,” said another, referring to the reporters and the paper.

“I won’t link to it, but somebody at the New York Times should be fired for printing Wilson’s address,” said another.

The paper responded, with the head of communications defending the decision.

“The story mentions only the name of the street where the couple have a house and that street has been widely reported on,” Eileen Murphy said Tuesday in an email to the Washington Examiner.

The original story also included a picture of Wilson’s marriage license, which contained the actual address. It was also later taken down.

“We originally posted a copy of the marriage license,” Murphy said. “When it was pointed out that the license contained a street address, we thought the right thing to do was to remove it, so we did.”