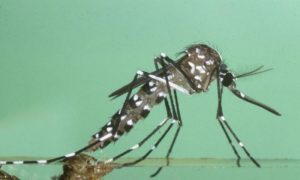 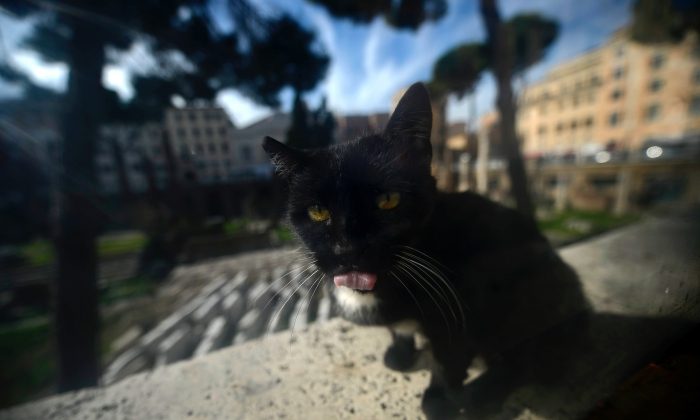 A stray cat rests amongst the ancient Area Sacra ruins in Rome on Oct. 30, 2012. (Filippo Monteforte/AFP/Getty Images)
US News

A stray cat was linked to the paralysis of a 24-year-old blogger during her vacation in Portugal. The feline she befriended and named Catarina during her trip carried a rare bacteria, Media Drum World (MDW) reported.

In 2014, Gemma Birch from Southport, United Kingdom, first suffered from symptoms of food poisoning, such as vomiting and a bloated stomach. On the last day before her return to the United Kingdom, she fell terribly ill, and even fainted during the flight home. She went to the hospital as soon as she arrived.

“When we got to passport control in England, my stomach bloated, and I looked nine months pregnant despite having no food or liquid in me,” she told MDW. “I was in hospital for a week on a drip as I was very dehydrated.”

My favourite photo of me and baby Layla 🐶❤️

Campylobacter and the Pescatarian

At the hospital, doctors found campylobacter in her stool: a bacteria that is the leading cause of diarrhea in the United Kingdom, according to the Health and Safety Executive (pdf). Birch found it odd that campylobacter was found as it is contracted by eating raw meat, ingesting unpasteurized milk, or drinking contaminated water—she’s a pescatarian.

“They found campylobacter in my stool but as I am a pescatarian, and don’t eat chicken, they asked me if I had come into contact with animals, so I said yes,” she told MDW.

It is believed that Catarina picked up the infection when she rummaged through bins. Over time, the disease gradually worsened, and her doctors told her that she just needed rest. But that didn’t help.

Another @avon_uk collaboration! I loveeee the purple tones in this one, really experimented with the lipstick and eyeshadow, I usually just go for the usual nude colours 💄💋 This is the Galactic set and you could buy this look for £22! Take a look at their website, the collections are leaving after tomorrow! It’s been amazing to work with Avon. This opportunity has been a dream 🌠 I’m always grateful and thank you all so much for your support!

She stated that one day she felt like she was dragged out of her bed in the middle of the night: her legs, which she couldn’t feel, slid off the bed and the rest of her body followed. To make matters worse, she couldn’t feel the carpet when she stood up, and even after scratching her leg until she bled, she felt nothing.

Realizing the severity of her illness, she went to the Southport Hospital, where she was diagnosed with Guillain-Barré syndrome (GBS). The syndrome confuses the body’s immune system into attacking the nervous system, and is known to be triggered by food poisoning, the flu, and cytomegalovirus, according to the National Health Service in England.

Because she did not receive early treatment her bladder and bowls were affected by the syndrome, she told MDW.

Birch learned how to walk and use her arms again in rehabilitation, and it took her a little over a year to recover. She managed to graduate from her university along with her twin sister. And rather than thinking negatively, she changed her perception about what happened and is thankful for the learning experience. She can still feel the damage caused to her nervous system whenever she suffers from infections or injuries, experiencing numbness and tingling sensations.

Yeyyy I’m a fully qualified psychotherapist! Since High School I’ve been working towards having my own private practice with clients and eventually leaving the world a happier place than the one I came into. I can’t wait to start my own counselling service in January 2019 ahhh! So much I need to plan. It’s been such a surreal and emotional day as I’m finally at the end of my education. Mental health is a huge passion of mine and I never thought I’d be in the position to spread awareness to 42,000 people on Instagram and YouTube. My university said I have to choose between social media and a career in psychotherapy, I say why? Counsellors have lives, they don’t live in that counselling room locked from the outside world. So many famous counsellors are spreading awareness on social media platforms and I’m all for it. The more we normalise mental health the better. Counsellors are normal people who have studied mental health but can still struggle with it. Counsellors go on holiday to relax and party with friends. It should be known that mental health practitioners are normal people and not wearing white coats and look all scary asking you to lye down on a couch. So because of this choice I had to make, I chose social media and graduated one year early. Im still qualified I just don’t have the research part to my degree. I want to thank my family so so so much for supporting this decision, they don’t understand how I can have a career on social media and they don’t know what Instagram is and why people like clicking on pictures or watching videos of me talking 😂 but they understand my passion for it. So yes, I’m going to do both and I’m sure I’m not the first psychotherapist.

Stray cats will have to look for someone else’s gentle pats.

“As much as I love them, I couldn’t touch a stray cat now. I love pet cats and would stroke them as I would hope they haven’t rummaged around hotel bins,” she told MDW.