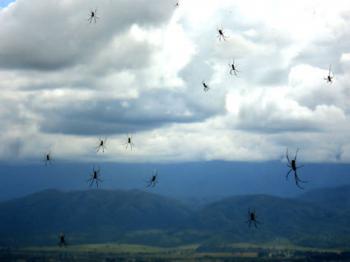 Throughout history many have witnessed showers of animals falling from the sky. This rain of spiders in Argentina was captured on film earlier this year. (Christian Oneto Gaona)
Beyond Science

Liwei Fu
View profile
Follow
biggersmaller
Print
In the emotionally charged 1999 P. T. Anderson movie, Magnolia, the characters witness an unusual event—the sky rains frogs. Perhaps referring to the biblical passage in which God casts down a rain of frogs on the Egyptians for to their refusal to free the Israelites, the shower of frogs proves a bizarre, yet effective, plot device in a film that explores themes of forgiveness and redemption. "And if thou refuse to let them go, behold, I will smite all thy borders with frogs," Exodus 8:1-15.

Since ancient times mankind has recorded several strange sightings of animals—frogs, fish, or insects—that fall from the skies. While many might consider this biblical legend to be merely mythical meteorology, this mysterious phenomenon was actually documented earlier this year by Argentine photographer, Christian Oneto Gaona.

During a visit to Argentina's Salta province on April 6, 2007, Christian and his friends were hiking up San Bernardo peak when they discovered that the ground around them was covered with spiders. As they looked up they saw hundreds of spiders falling from the sky. Suddenly remembering that he had a camera, Christian snapped several shots of the falling arachnids. Although such occurrences have been noted for centuries, Christian's pictures represent the first documented evidence of this phenomenon.

A few years ago, strange rains of live frogs, fish, and many other animals were periodically reported throughout the country, but up to now nobody had the opportunity to photograph them. Because the past events happened so fast, and the rains were so heavy, photo documentation proved difficult to obtain. The conditions Christian experienced were different in that the spider rain occurred on a cloudless day, and involved a comparatively lighter subject, where the spiders fell slow enough to be captured on film.

Many animal rains throughout history involve frogs. The first case recorded by the scientific community was in 1873, when Scientific American reported that Kansas City was covered with frogs after a storm. In July 1901, witnesses in Minneapolis recounted a similar story. After the storm, they discovered that four streets were covered with almost three inches deep in frogs, making it impossible to walk.{etRelate 5912,5590,5589,4906}

The most recent case was on July 26, 2005, when a newspaper in Belgrade reported that millions of frogs fell in Odzaci, a northeast village of Serbia. After a strong wind, the sky was covered in clouds—as before any storm—but what fell was not water.  Instead, a countless number of frogs not indigenous to that area fell across the entire village. "I don't know where the cloud came from, it had a strange color and shape," said villager, Caja Jovanovic. "Just as I was looking at it, frogs started to fall. I thought that a plane carrying a cargo of frogs had exploded."

In May 1981, residents of Naphlion, Greece woke up to a shower of small green frogs. The local weather service explained that frogs had merely been lifted by strong winds. They must have been quite severe, since that type of frog is only found in North Africa!

Aside from frogs, the most common animal rain involves fish—a frequent occurrence in both India and Australia. A study done by Australian zoologist Gilbert Whitley found that in 1972 it rained fish some 50 times.

The Honduran province of Yoro has a history of raining fish going back so far that it has become part of the culture of this region. Each year between May and July, witnesses see what starts out like a normal storm—black clouds, thunder, lightening, and hard rain— but when the rain stops, the ground is covered with live fish that the villagers cook and eat. Since 1998, the Yoro people have held an annual "Rain of the Fish" festival to mark this miraculous occurrence. On July 16, 2006, Honduran television gave a special report on this phenomenon since it now rains fish there up to two times per year.

In 1970, National Geographic sent specialists to Honduras to investigate this curious weather. They found that the falling fish were all the same size—less than 6 inches— and were all blind. Researches identified the species, but could not find record of it in the surrounding region. Finally, they proposed that these fish mast have lived underground, and were blind due to never having been exposed to light. Even so, actual proof of this theory has yet to materialize.

When science does acknowledge this occurrence, the explanation often centers on a storm or hurricane lifting creatures out of the water and through the air where they finally fall in remote areas. However, this does not explain how such a powerful storm could be discriminating enough to select only animals of the same species, and careful enough not to touch surrounding plant life. Tornadoes and hurricanes are known to scatter and destroy everything in its wake.  Evidence of their presence differs quite a bit from the vast majority of animal rains concentrated to relatively small areas.

Another problem with this theory is that the animals that fall are alive—suggesting that little time has passed between the moment the storm collected them and when they fell.  How does this happen when there are no known bodies of water nearby? There are even occasions, like with the Salta spiders, in which the animals appear on clear days, without wind or precipitation.

So why do these animal rains occur? There have been several theories, but nothing has yet been suitably explained or proven. It appears that Mother Nature still holds some mysteries in this modern age.