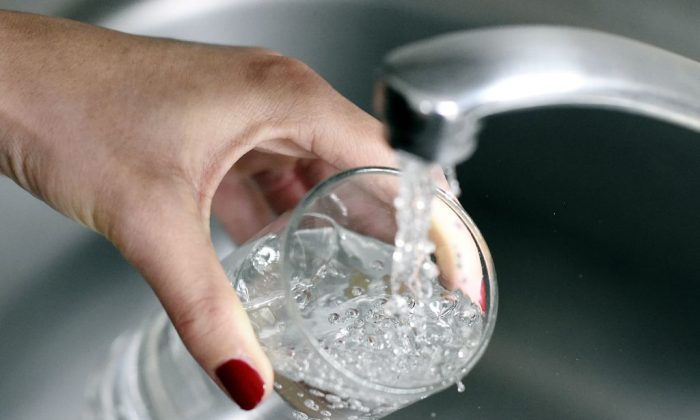 A woman fills up a glass with water in Paris, France, on April 27, 2014. Eight out of ten people in France say they have ''confidence'' in tap water, according to the water information center's annual barometer, on April 29, 2014. (Franck Fife/AFP/Getty Images)
Science

Instinctively, people assume that if you poke additional holes in a sieve, more water will pass through; however, recent research demonstrates that the opposite may be true at the nanoscale with a global team of scientists from Australia, Germany, France and Japan finding that water does not behave as expected while using Graphene Oxide (GO) filters.

The researchers found, whilst experimenting with GO membranes, that the chemical environment and surface tension have an important role to play in water permeability and could have significant ramifications for water purification, energy storage, and hydrogen production.

The study, published in Nano Letters, found that the pore density of a sieve doesn’t necessarily define its permeability; at the nanoscale, adding more tiny holes to a sieve doesn’t always allow more water to pass through.

“If you create more and more holes in a sieve, you expect it to become more permeable to water,” said the senior author of the study, Assoc. Prof. Rakesh Joshi, from the UNSW, in a news release by the university.

“But surprisingly, that is the opposite of what happened in our experiments with graphene oxide membranes,” said Joshi.

One of the properties that allow graphene oxide to block water flow so successfully is its hydrophobic —repellant of water— pores.

In chemical compounds —substances composed of atoms from more than one element—there are functional groups—individual atoms or groups of atoms within a molecule that have comparable chemical properties across the compounds they appear in. These functional groups can be hydrophilic—attracted to water—or hydrophobic.

“Surprisingly, more important for the water flux (flow of water through a membrane) isn’t the number of pores, but whether the pores are hydrophobic or hydrophilic,” said Tobias Foller, the lead author of the study.

“That’s very unexpected as the GO layers are only one atom thick. One expects the water to just pass through the pores, no matter if they attract or repel water.”

The study found that there was no water flow through the hydrophobic pores of graphene oxide filters, although there were many tiny holes in the filters used.

“With filters, you usually expect more water flow with more holes,”  said Prof. Marika Schleberger, a co-author of the study from Duisburg, Germany.

“But in our case, where we have more holes, water flow is lower, and that’s due to the chemical nature of the graphene oxide holes, which are in this case water-repelling.”

The researchers said that surface tension also contributes to the unexpected interactions between water and graphene oxide pores. Surface tension occurs because molecules, such as water, want to stick together.

Water, when forced into a sufficiently small space, can be moved upwards using the cohesive bonds between water molecules and the solid surfaces surrounding the liquid. This is how trees can overcome gravity and draw water from their roots, up their capillaries—small tubes in the plant— to the rest of the plant.

The same forces that allow trees to draw up water also stops water from flowing through the tiny holes in graphene oxide pores. The pores, which are made at a scale of one-millionth of a millimetre or less, act as capillaries, pushing the water up rather than letting it flow through.

“When you confine water in the smallest possible capillaries–just the size of a few atoms–the water molecules attract themselves so much they form a tight network,” said Foller.

“Undisturbed, this network is so strong that it doesn’t allow the molecules to be released and pass through the sieve, even if you increase the number of pores.”

The researchers said that possible applications for the discovery would be ultrafine sieves, which are made of different materials, and are diverse. Additionally, the findings of this study could assist scientists in improving liquid transportation in atomic sieves and developing highly precise filtration systems.

“By understanding which parameters will increase or decreases water flux, we can optimise many possible applications of graphene oxide for water purification, energy storage, hydrogen production and more,” Foller said.

“We hope other engineers and scientists can use this new knowledge to improve their own devices and lead to new developments in the future.”

In 2018, UNSW demonstrated the efficacy of GO as a water filtration system, designing a laboratory-scale filter that could remove more than 99 percent of pervasive natural organic matter from drinking water.

“Our advance is to use filters based on graphene – an extremely thin form of carbon. No other filtration method has come close to removing 99% of natural organic matter from water at low pressure,” Prof. Joshi said in a UNSW release.

“Our results indicate that graphene-based membranes could be converted into an alternative new option that could in the future be retrofitted in conventional water treatment plants.”

“The new treatment system is made by converting naturally occurring graphite into graphene oxide membranes that allow high water flow at atmospheric pressure while removing virtually all of the organic matter,” Joshi said.

The research team investigated the application of graphene oxide in water filtration by running laboratory tests on filtered water from the Nepean Water Filtration Plant; the results of this study were published in Carbon.

“The most common methods used at present to remove organic matter from water supplies include the application of chemical coagulants,” said Heriberto Bustamante, PhD of Sydney Water.

“However, these existing treatments are only partly effective, particularly as the concentration of natural organic matter is increasing.”

This discovery was made by the University of New South Wales (UNSW) in Australia, the University of Duisburg-Essen in Germany, the GANIL in France and the Toyota Technological Institute in Japan and was supported by both the European Union and the Humboldt Research Foundation.