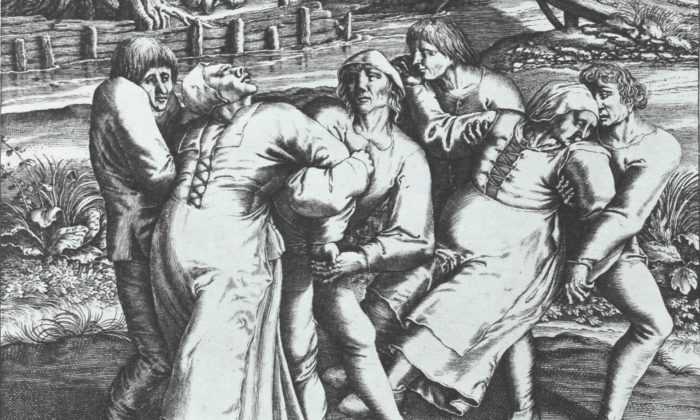 Engraving of Hendrik Hondius portraying three women affected by the ‘dancing plague.’ Work based on original drawing by Peter Brueghel, who supposedly witnessed an outbreak in 1564 in Flanders. (Wikimedia Commons)
Beyond Science

Mass hysteria is a term used to describe the situation in which physical or psychological symptoms appear en masse, spreading rapidly throughout communities, and occasionally across whole cities and countries.  During an outbreak, afflicted individuals may experience uncontrollable laughter, fainting, fits, dizziness, muscle weakness, or any number of other symptoms that do not appear to have any physical cause. Cases of hysteria have been reported all over the world for centuries and provide a fascinating insight into the complex nature of human psychology.

The term ‘hysteria’ derives from the Greek word ‘hystera’ meaning ‘uterus,’ and is generally attributed to the ancient Greek physician Hippocrates. However, the association with the uterus goes all the way back to the ancient Egyptian Kahun Papyrus (1900 B.C.), which identifies the cause of hysterical disorders as being the spontaneous movement of the uterus to various locations within the female body.

By the Middle Ages, this was replaced by a belief in witchcraft, demonic possession, or insanity as the cause.  While occurrences of mass hysteria continue to confound the medical community, it is now generally believed to be linked to extreme cases of emotional or mental stress.

Here’s a look at some famous—and bizarre—cases of mass hysteria in history.

Dance mania, otherwise known as the Dancing Plague, St. John’s Dance, or the Dance of St. Vitus, gripped mainland Europe between the 13th and 17th centuries. One of the most well-known major outbreaks took place in Aachen, Germany, on June 24, 1374. During this occurrence, afflicted individuals would dance hysterically through the streets for hours, days, and apparently even months, until they collapsed due to exhaustion or died from heart attack or stroke. The number of participants at any one outbreak could reach into the thousands.

The Dancing Plague is known to have occurred numerous times throughout medieval Europe, with outbreaks occurring in Italy, Luxembourg, France, Germany, Holland, and Switzerland. It was initially considered that the dancing mania was a curse sent by a saint, commonly thought to be St. John the Baptist or St. Vitus, hence the alternative names for the condition. People suffering from this condition would therefore proceed to places dedicated to the said saint in order to pray for deliverance from the affliction, a ‘remedy’ that apparently restored many to full health.

Institutional settings such as schools, prisons, and tightly-knit communities have often been the settings for outbreaks of mass hysteria, and European Christian convents were no different. In the 1844 book ‘Epidemics of the Middle Ages’ by J. F. C. Hecker, an account is given of a nun in a convent in France who began to meow like a cat. Shortly afterward, other nuns began exhibiting the same behavior, until the whole convent was plagued with meowing nuns. This concerned the surrounding Christian neighborhood, and eventually soldiers were called in to try to contain the situation. The nuns were whipped and beaten by the soldiers until they promised to cease making the ear-piercing noises. During this era, belief in possession was common, and in France, cats were often viewed as being in allegiance with the devil.

The Tanganyika laughter epidemic began on Jan. 30, 1962, at a mission-run boarding school for girls in Kashasha, Tanzania. The laughter started among three girls but quickly spread throughout the entire school, persisting for hours, days, and then weeks, leading to its closure on March 18, 1962. But it didn’t end there. After the school was closed, the mass hysteria spread to other schools and eventually to other nearby villages. Thousands of children were affected by the epidemic, and 14 schools were forced to close. The hysteria eventually died down some eighteen months after it started.

One of the most notorious instances of mass hysteria is that which occurred in Salem, Mass., in 1692. Dozens of young girls displayed fits of uncontrollable screaming and contortions, which eventually triggered a flood of witchcraft accusations. The result was a series of hearings and prosecutions of people accused of witchcraft, known as the Salem Witch Trials, which resulted in the deaths of 25 citizens of Salem and nearby towns.

The witch trials of Salem, which became a highly influential event in U.S. history, have been used in political rhetoric and popular literature to highlight the dangers of isolationism, religious extremism, false accusations, and breakdowns in due process.

Instances involving the propagation of mass hysteria might seem at odds with an increasingly educated general public, who no longer rely on wandering wombs, demonic possessions, and witchcraft as an explanation. But episodes of mass hysteria continue to occur, the most recent of which took place in 2012 when 1,900 children across 15 schools in Sri Lanka were treated for a range of symptoms including skin rashes, vertigo, and coughing, which had no obvious physical cause. While cases of hysteria are easy to laugh off as ridiculous and bizarre behavior, research has shown that there are a number of complex factors that can contribute to the formation and spread of collective hysteria, including social anxieties, cultural pressures, rumors, fears, extraordinary excitement, religious beliefs, reinforcing of actions by authority figures, and extreme stress.

While social, political, and religious contexts have changed over the centuries, the human psychology has largely remained the same, and it is for this reason we are likely to see many more occasions of mass hysteria into the future.