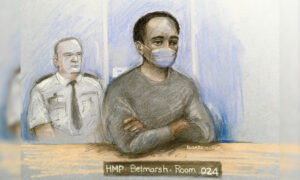 Tom Brittain, aka Twister, 26, was stabbed to death at a friend’s home in Colchester, Essex, UK, while his friends shielded their young children from the attack.

Jurors began listening to testimony in the trial of suspects Andre Villa, 19, and Jack Hummerstone, 18, Sky News reported Monday. The murder occurred on March 9. Brittain and his friend, Matthew Purves, were asleep in the living room, and Zoe Lewis and the children were asleep upstairs, when the two men allegedly broke into the house.

Brittain was stabbed several times. Prosecutor Tony Prosser said the men had covered their faces and were armed with a kitchen knife and a pistol. Purves and Lewis went to the childrens’ bedroom and sought to keep the intruders out of the room. They heard Brittain say he’d been stabbed. Brittain bled to death.

Prosser said, according to Sky News: “Whether this was a plan for a robbery, for drugs or a punishment beating, we don’t know. … What is certain is that they went to the flat with a hostile intention.”

On a Facebook page dedicated to Brittain’s memory, Joan Andi wrote that no prison sentence for the suspects “could equal the loss of this young mans life. … A loss of a talented nice young man. I only had the pleasure of meeting Tom once x sadly never to be again.”

The administrator of the page, “Jenks,” tops it with a message saying Brittain was one of the funniest people he has ever met—“a true brother. I’ll never stop thinking of you. R.I.P Mate!”

Jenks writes: “Well both of tom’s killer have been brought to a degree of justice, i hope they have a long lifetime behind bars! god bless you mate, i hope your spirit and presence is shining up above the clouds!”