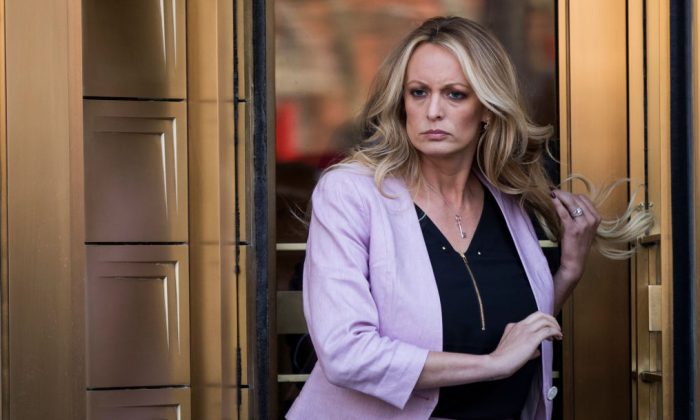 Adult film actress Stormy Daniels has been ordered to pay nearly $300,000 in attorney fees, costs, and sanctions to former President Donald Trump after a federal appeals court rejected her bid to overturn a lower court decision regarding a defamation lawsuit brought against him in 2018.

Trump announced the news in a statement on March 21 where he also took aim at Daniels’ lawyer, Michael Avenatti, who was convicted of wire fraud and aggravated identity theft in February.

The latest ruling was issued by the U.S. Circuit Court of Appeals for the Ninth Circuit.

“The 9th Circuit just issued a final ruling in the Stephanie Clifford (aka Stormy Daniels) frivolous lawsuit case against me bought by her disgraced lawyer, Michael Avenatti, upholding the lower ruling that she owes me nearly $300,000 in attorney fees, costs, and sanctions (not including appeal costs),” Trump said.

Daniels has claimed that she had a one-night affair with Trump in 2006 and that she was paid $130,000 as part of a non-disclosure agreement she signed days before the 2016 election to prevent her from discussing the alleged affair.

She later went on to write a book about her alleged affair with Trump and has done multiple “tell-all” interviews promoting her side of the story.

Trump has repeatedly maintained that the affair did not take place.

“As I have stated many times throughout the years, I have never had an affair with Stormy Daniels, not would I ever have wanted to. The ruling was a total and complete victory and vindication for, and of me,” Trump said on Monday.

Daniels additionally claimed that in 2011, five years after the alleged affair took place, she was approached by an unidentified man in a Las Vegas parking lot while she was with her child. The man proceeded to threaten her to keep quiet about the alleged affair, Daniels said.

She then released a composite sketch of the mystery man and sued Trump for defamation after he responded to the sketch in a Twitter post, writing: “A sketch years later about a nonexistent man. A total con job, playing the Fake News Media for Fools (but they know it)!”

Federal judge Judge James Otero dismissed that lawsuit later in 2018, saying Trump’s statement was “rhetorical hyperbole” against a political adversary and was protected by the First Amendment of the Constitution. He also ruled that Trump was entitled to receive attorneys fees which were set at $293,000.

In February 2021, the U.S. Supreme Court declined to hear Daniels appeal to revive the lawsuit.

In his statement on Monday, Trump went on to call Daniels’ lawsuit a “purely political stunt that never should have been started, or allowed to happen” adding that he was pleased that his legal team was “able to bring it to a successful conclusion after the court fully rejected her appeal.”

“Now all I have to do is wait for the money she owes me,” Trump said.

Daniels also reacted to Monday’s ruling on social media, where she declared that she will “go to jail before I pay a penny,” in response to a Twitter user who shared the news of Trump’s court victory.

The Epoch Times has contacted Stormy Daniels for comment.

Last month, Daniels’s former lawyer Avenatti was convicted of wire fraud and aggravated identity theft after prosecutors accused him of defrauding Daniels by telling her agent to send two installments of a $300,000 advance payment for her 2018 book to a bank account controlled by him as opposed to being controlled by her. This was done without her knowledge, prosecutors said.