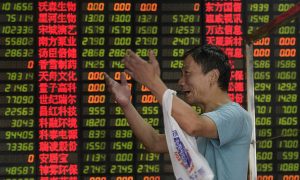 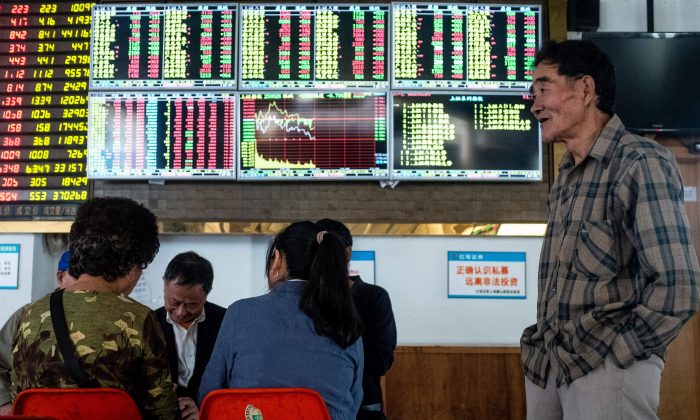 An investor looks at an electronic board showing stock information at a brokerage house in Shanghai on October 15, 2018. (Photo by JOHANNES EISELE/AFP/Getty Images)
China Business & Economy

The Chinese stock market is in trouble. The Shanghai Stock Exchange Composite Index fell 24.59 percent in 2018—the biggest annual drop since 2008. This makes the Shanghai exchange the world’s worst performing stock market.

All told, more than 90 percent of A-shares traded in the Shenzhen and Shanghai exchanges fell in stock prices. In total, A-shares shrank by 13.26 trillion yuan (about $1.97 trillion) in value last year, according to Chinese media.

To comply with rules by China’s securities regulator, all listed companies had to publish their performance forecasts for the past year by the end of January.

In the past year, there have been numerous unusual stories about the losses at these listed companies, some dramatic, some absurd.

Dalian Zeus Entertainment Co., a video game company, was among the biggest losers.  In its revised performance report announced on Jan. 30, it was estimated that the company had a net loss of 7.3 to 7.8 billion yuan (about $1.08 to 1.16 billion) in 2018, far exceeding its market value of 4 billion yuan (about $593 million).

Zeus Entertainment was listed in 2014 with a valuation of 2.45 billion yuan ($363 million). In less than five years, Zhu Ye, the company’s chairman, completed 12 mergers and acquisitions.

One of his most profitable moves was when he spent 1.323 billion yuan (about $196 million) to purchase Ruyi Xinxin Film Investment, a film and TV production company. When he sold his shares nine months later, he made a net profit of 294 million yuan (about $43.6 million).

But, in May 2018, Zhu was investigated by the China Securities Regulatory Commission on suspicion of violating securities laws.

In a recent report by Chinese financial media Caijing, several companies used creative ideas in a desperate bid to reverse their losses.

Hunan TV & Broadcast Intermediary Co., aside from being a TV broadcasting company, began an artwork management business in 2006. The company amassed a collection of over 200 pieces of artwork by famous Chinese artists.

In an attempt to improve its balance sheet, the company announced in December that it planned to sell an oil painting, “The Old Man Moves the Mountain” by painter Xu Beihong, to one of its major shareholders at 200 million yuan (about $29.65 million).

Chinese financial media Yicai reported that the sale proceeds would have been just enough for the firm to declare a profit in 2018 and emerge from the red. But after public criticism, the company had to terminate the sale.

Meanwhile, Chuying Agro-Pastoral Group Co., a company that specializes in breeding and distributing livestock, had suffered frequent bond defaults since 2018. By November 2018, the company’s accumulated overdue debts had exceeded 900 million yuan (about $133.4 million). Short of cash, Chuying decided to pay back the principal with deferred monetary payment, while the interests would be repaid in the form of pork products, such as ham and premium pork gift boxes.

Incidents of chairmen missing or arrested frequently made the headlines in 2018.

There are a total of 3,578 companies in the Shanghai and Shenzhen stock markets. In 2018, 603 chairman resigned from their companies, while 487 companies changed their chairman candidate, according to a Jan. 15 report by Chinese news portal Sina. In addition, 19 chairmen went missing, more than 30 chairmen were arrested or investigated, and three chairmen committed suicide or died from unknown causes.

For example, according to Chinese media Caixin, Li Xiaozhen, the new chairman of Steyr Motors, a manufacturer of auto parts, disappeared less than a month after he took office in July 2018.

Chen Zhicheng, chairman of Chinese chipmaker InfoTM, was arrested on suspicion of billing fraud. On the day the company announced Chen’s resignation on Feb. 26 2018, InfoTM’s stock price actually rose to an all-time peak.