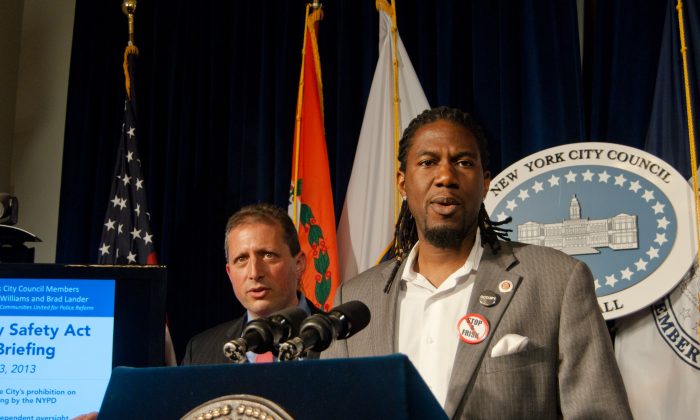 NEW YORK—Opponents of stop-and-frisk argue that the damage it causes outweigh the crimes it helps prevent, because perceived racial profiling and over-policing of neighborhoods is causing some communities to lose trust in law enforcement. The NYPD is increasing becoming alienated from the people it is meant to protect and serve.

Dillard said he has been stopped and frisked close to 10 times in the last four years by police officers. “There have been cases where I’ve been late for work, late for school,” he said.

Stop-and-frisk is a practice of the NYPD whereby a police officer stops and searches a person he or she reasonably suspects has committed, is committing, or is about to commit a crime. The practice is the subject of a federal court trial where plaintiffs are claiming the stops amount to racial profiling.

Dillard said the stop-and-frisk issue is becoming a larger problem in his community. “It’s destroying the relationship between the communities and the police officers,” he added.

In City Council right now are two bills intended to increase regulation of stop-and-frisk. One would allow people to file racial profiling claims against police officers in state courts; the other would create an inspector general for the NYPD.

The bills are part of the Community Safety Act, a set of four bills aimed at reforming the NYPD’s practicing and legislating greater oversight.

After weeks of limbo, things took an unexpected turn on Monday, June 10, when Speaker Christine Quinn said she would bypass the Council’s Public Safety Committee with an unprecedented discharge motion that would bring the bills to a vote in the city council.

The bill’s sponsors will now introduce amended versions in time for Wednesday’s council meeting, and on Thursday the sponsors will file motions to discharge the bills, which will bring them to vote.

The updated bills were discussed by council members Jumaane Williams (D-Brooklyn) and Brad Lander (D-Brooklyn) during a press briefing at City Hall June 11.

The bills opponents say passing them would make it difficult for police officers to do their jobs because of the potential for racial profiling lawsuits. An inspector general in the NYPD, they say, would impede efforts for law enforcement and cooperation with other agencies on counterterrorism.

Prior to the updates, Peter Vallone Jr., chairman of the Public Safety Committee, said according to the Wall Street Journal, “It’s fitting that it takes a historic first to move the most dangerous bill in the history of the council.”

The bills supporters say it will only help enforce existing laws. They also point out that inspector generals are present in most major law enforcement branches across the country—including the FBI, CIA, and Los Angeles Police Department.

Williams, however, says the long-term effects caused by stop-and-frisk are more serious than the crimes the program has helped prevent.

In communities where stop-and-frisks are frequent, tensions are growing between residents and the police.

“This is feeling within the community that’s a powder keg waiting to happen,” Williams told The Epoch Times.

“Just from law enforcement, you have people who are less likely to work with them to keep the community safe,” Williams said. “Then you have young people who just don’t want to be around police officers—they don’t see them as people who are there to help.”

And while many people have been arrested for misdemeanors, such as possession of marijuana, the long-term effect is that in already-troubled communities, some youth are having difficulties getting into college and finding good jobs Williams said.

“They can’t get scholarships, sometimes they get kicked out of their homes, people get deported,” he added. “There are a lot of effects this has that have not been talked about.”

Mayor Michael Bloomberg has said he will veto both bills, yet both are still likely to pass. In order to override Bloomberg’s veto, they will each need at least 34 votes from the city council. Last week the racial profiling bill had 33 co-sponsors and the inspector general bill had 35 co-sponsors.

Lander said during the conference that since he and Williams amended the bills, they will need to get the co-sponsors again. “We are optimistic we will have everybody back on as co-sponsors,” Lander said.