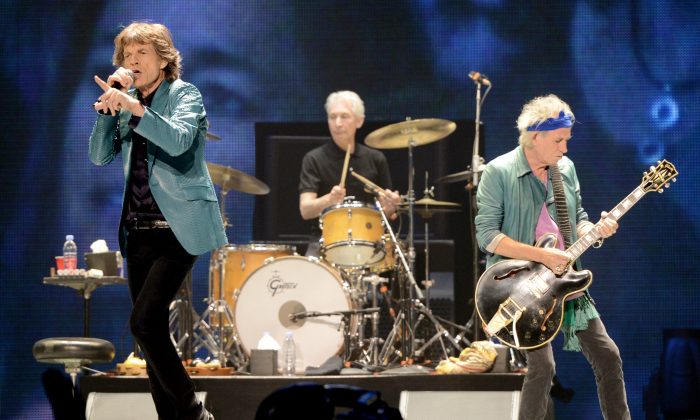 Singer Mick Jagger, musicians Charlie Watts and Keith Richards of The Rolling Stones perform at The Honda Center on May 15, 2013 in Anaheim, California as part of their latest tour. (Kevin Winter/Getty Images)
Canada

Stones Shine a Light on Toronto

TORONTO-The Rolling Stones have a global reputation as one of the greatest rock bands of all time, but the particularly long-standing relationship the group has maintained with Canada has been one of mutual satisfaction.

Since the day when Canada kickstarted the band’s first major North American tour, the country has played a prominent role in the band’s mythology and been the source of both career highs and personal lows.

Legendary albums, secret shows and public scandals have all taken shape on Canadian soil and contributed to the Stones’ larger-than-life reputation.

“It is a very special relationship that they have to Canada,” rock music historian John Einarson said in a telephone interview from Winnipeg. “It’s been very kind of hot and cold.”

The Rolling Stones’ affiliation with Canada dates nearly all the way back to the early days of their career as international superstars.

While they had played the U.S. in the early 1960s, Einarson said they didn’t embark on a major North American tour until the wave of English musicians known as the British Invasion had gained popularity on the other side of the Atlantic.

That tour got under way in Montreal on April 23, 1965, Einarson said, adding the Canadian leg was distinctive for its mix of venues. Mick Jagger and company found themselves alternating between selling out major stadium shows and playing to crowds crammed into an amusement park or a YMCA auditorium, he said.

Since then, Canada has been a frequent stop on Stones’ tours and a common destination for private band rehearsals.

Einarson said Toronto has been a particularly popular retreat thanks to Michael Cohl, the high-profile theatre and concert promoter who has been handling the band’s arrangements for nearly four decades.

Many of the group’s Canadian highlights have unfolded in its largest city.

Einarson said the Stones had a penchant for booking small venues under assumed names and treating fans to impromptu concerts in a more intimate setting.

One of those escapades, however, turned into one of the group’s most eventful chapters.
A visit to Toronto in March 1977 yielded one of the band’s best-selling live albums, but also plunged the group into personal scandal.

Two nights’ worth of stealthily organized shows at the El Macambo provided half the material for the album “Love you Live,” which went gold in the U.S. and reached number three on the U.K. charts.

But the shows were overshadowed by the presence of Margaret Trudeau, wife of then Prime Minister Pierre Trudeau. She latched onto the group during their stay and purportedly got especially cozy with band member Ronnie Wood.

“She ended up going with them to the gig and being really groupie-like,” Einarson said. “Being very obvious that she was with the Stones and was part of their entourage … She was really kicking up her wild oats.”

The scandal grew further when guitarist Kieth Richards was arrested by the RCMP and charged with possession of heroin for the purpose of trafficking.

In his autobiography “Life,” Richards recalled that he was facing the prospect of hard jail time if convicted. He lined up Canadian celebrity character witnesses such as Dan Ackroyd and Lorne Michaels, but in the end caught a break from a judge he praised in no uncertain terms.

Einarson said: “The verdict was guilty, but the judge concluded, ‘I will not incarcerate him for addiction and wealth.’ He must be freed, said the judge, to get on with his treatment, with a condition. He will perform a concert for the blind. Very intelligent, I thought. The most Solomon-like judgment that had been handed down in many a year.”

The fundraising concert went ahead in April, 1979 in Oshawa, Ont. with more than $50,000 going toward the Canadian National Institute for the Blind.

Since then, the Stones have returned to the Toronto area on many occasions and even produced another live album, “Light the Fuse.”

Their most notable reappearance took place in 2003 when the band agreed to lead the effort to rejuvenate the city’s flagging tourism industry, which was ravaged by the outbreak of SARS earlier that year. The group became one of the headlining acts of Sarsstock, a giant outdoor festival that featured such other rock luminaries like AC-DC and Rush.

Einarson said the Stones’ willingness to participate in the show stands as proof of the affection band members have come to feel for the city.

“That was a real nod from the Stones to how much they felt about Toronto to do that,” he said. “They weren’t on the road or anything at the time, they just kind of came back and did it.”

For Toronto residents eager to take in another Rolling Stones gig, time is their side. The band played one sold-out show at Toronto’s Air Canada Centre on May 25 and will play another on June 6.