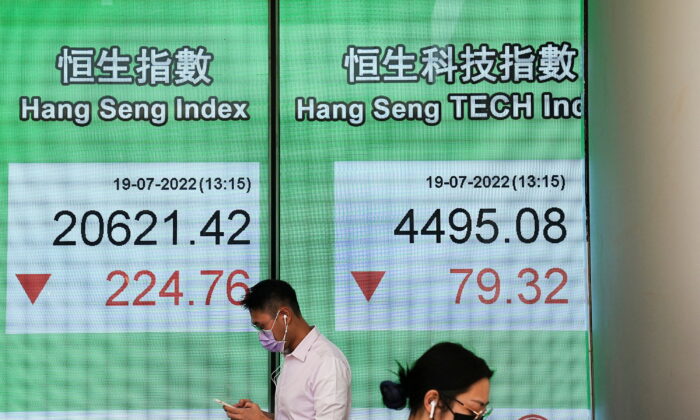 LONDON—Stocks headed lower on Monday with investors in a cautious mood ahead of the Federal Reserve’s two-day policy meeting and what could be the latest central bank signal of an even faster pace of tightening just as signs of a global slowdown mount.

Overall, the start of the week across markets began quietly, with the dollar holding above a 2–1/2 week high and government bond yields little changed after falling on Friday.

U.S. Treasury Secretary Janet Yellen said on Sunday that U.S. economic growth was slowing but added that a recession was not inevitable. Data, however, suggests the likelihood of a downturn.

U.S. business activity contracted for the first time in nearly two years amid persistently heated inflation and rapidly rising rates, according to another survey on Friday.

“Increased gloom about the outlook for the global economy looks likely to continue in the coming months as fears over elevated inflation, rising interest rates, and Russian gas in Europe continue to weigh on sentiment,” said Mark Haefele, Global Wealth Management Chief Investment Officer at UBS.

“The risks of recession are increasing, but we recommend investors avoid positioning for any single scenario.”

The pullback in stock prices follows a rebound in recent weeks, as investors bought back into markets that have fallen sharply in 2022 on fears of further central bank interest rate hiking, still-higher inflation, and weaker economic growth.

Wall Street futures pointed to a weak or flat open.

MSCI’s World index dipped 0.2 percent, although Monday’s fall comes after it hit its highest since June 10 on Friday.

All Eyes on Fed

The Fed concludes a two-day meeting on Wednesday and markets are priced for a 75 basis-point rate hike, with about a 9 percent chance of a full one percentage-point increase.

Investors are on guard this week for how much a strong dollar will hurt financial results from heavyweights Apple and Microsoft, among others.

“Risk markets are obviously priced for some kind of slowdown, but are they priced for an outright recession? I would argue no,” said Ray Attrill, head of currency strategy at National Australia Bank.

“In that sense, it’s hard to say we’ve reached a bottom as far as risk sentiment is concerned.”

The dollar index—which measures the safe-haven currency against six major peers—was little changed at 106.61, after climbing off a 2–1/2-week low of 106.10 reached on Friday.

The 10-year U.S. Treasury yield was little changed at 2.794 percent after sliding from as high as 3.083 percent over the previous two sessions.