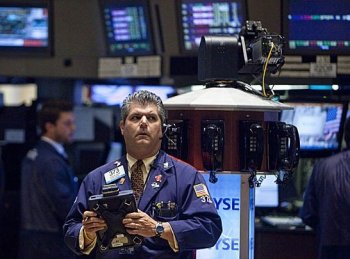 DEBT FEARS: A trader speaks on the phone while working on the floor of the New York Stock Exchange before the closing bell, July 11. (Ramin Talaie/Getty Images)
Business & Economy

Frank Yu
View profile
Follow
biggersmaller
Print
NEW YORK—U.S. stocks tumbled on Monday, dropping the most in a month, as investors digested a slew of negative economic news, from last week’s disappointing jobs report, to worries over the eurozone and U.S. debt talks in Congress.

The Dow Jones Industrial Average dropped more than 151 points, or 1.2 percent, to end Monday trading at 12,505.76 points. The S&P 500 was down more than 2 percent at one point but rallied late to end the trading day 1.8 percent lower. The Nasdaq Composite Index fell by 2 percent.

All the major S&P industries were lower on Monday, especially financials and materials.

A perfect storm fell over Wall Street Monday as President Barack Obama’s talks with congressional Republicans over the U.S. debt ceiling reached an impasse. Obama said Monday that he vows to meet with congressional leaders every day until a resolution is reached, after he said he would not sign a shorter-term deal.

In addition, last week’s weak June jobs report and an uptick in the unemployment rate had spooked investors and cast a shadow over the speed of the U.S. economic recovery. The CBOE Volatility Index, or VIX, commonly referred to as the market’s "fear gauge," rose by 17 percent Monday, signaling that investors expect more market volatility going forward.

Also on Monday, more reports from Europe further dampened investors’ optimism regarding the eurozone’s sovereign debt situation. The euro currency hit a six-week low against the U.S. dollar, as analysts worry that the sovereign debt crisis could spill over to Italy and Spain, two of the eurozone’s biggest economies after Germany and France.

All major European indices fell Monday, with the FTSE 100 down about 1 percent in London, while the DAX index in Frankfurt dropped 2.33 percent. Shares of Intesa Sanpaolo, Italy’s biggest bank by market capitalization, fell by 7.74 percent Monday.

The company reported $322 million in earnings, which is around 28 cents per common share. The results were higher than those from the same period in 2010.

“Although the economic recovery is uneven, the overall outlook for Alcoa—and for aluminum—remains positive,” declared Klaus Kleinfeld, Alcoa’s CEO, in a statement Monday. Aluminum prices have increased over the last few months due to demand from emerging markets, such as China, which is currently the world’s biggest importer of aluminum.

Alcoa shares were up slightly in after-hours trading.