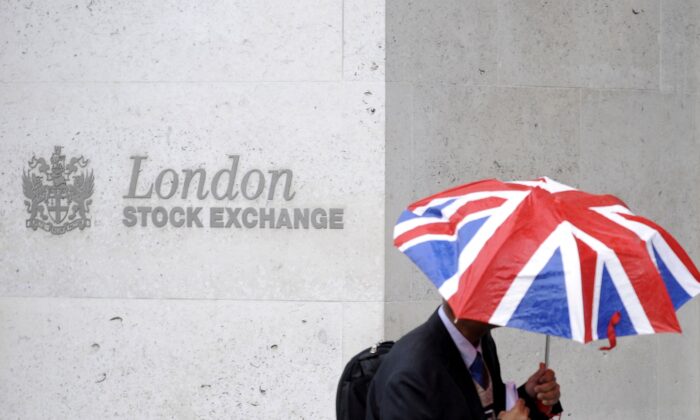 LONDON—Stock markets fell on Thursday after Russian-backed separatists and Ukrainian government forces accused each other of firing shells, sending traders to seek safety in government bonds, and pushing gold prices to a new eight-month high.

The two sides traded accusations each had fired across the ceasefire line in eastern Ukraine, raising alarm at a time when Russia has massed more than 100,000 troops close to Ukraine’s borders. The West accuses Russia of preparing for an invasion, while Moscow says it is pulling back some troops and accuses Kyiv of planning an escalation to try to recapture rebel-held territory by force.

Losses on stock markets were widespread, though not as big as in recent sessions.

In Europe, the Euro STOXX had slipped 0.1 percent by 1150 GMT while Britain’s FTSE 100 dropped 0.65 percent. Strong corporate earnings in Europe helped keep the losses in check.

Wall Street futures pointed to a lower open, while in Asia MSCI’s broadest index of Asia-Pacific shares eked out a 0.15 percent rise by the close.

The MSCI world equity index, which tracks shares in 50 countries, was slightly lower on the day.

Westpac analyst Sean Callow said markets were “clearly on edge” and vulnerable since a lot of traders had assumed tension was easing.

Investors bought into government bonds. Yields on the U.S. 10-year Treasury note dropped as much as 6 basis points and were last down 1 bps at 2 percent.

Yields on Germany’s 10-year government bond, the go-to safe-haven asset in the eurozone, were little changed at 0.267 percent.

The Russia-Ukraine crisis is unnerving investors just as markets were already struggling. Investors are worried the pace of monetary policy tightening—triggered by central banks needing to tame soaring inflation—and a reduction in cheap cash will take more of the air out of highly valued asset prices.

Most major markets are down sharply in 2022, with the tech-heavy Nasdaq off 12 percent.

Some investors advised clients not to panic over the geopolitical crisis, however.

He added that their base case was a “relaxation of geopolitical tensions.”

Gold prices broke higher to hit an eight-month high of $1,892 an ounce, up 1.2 percent on the session and helped by nervousness across markets and a weaker dollar.

Crude oil prices fell sharply but were off their lows. They had earlier tumbled more than 2 percent on optimism that negotiations will salvage Iran’s 2015 nuclear deal and bring more supply to a tight market.

Worries about a super-hawkish Fed rate-tightening campaign, potentially including a 50 basis-point hike next month, took a step down overnight after minutes of the latest policy meeting signaled a more measured, data-dependent approach from central bank officials.

The dollar, also regarded as a safe haven, initially rose against most currencies but those gains subsided and the greenback was marginally lower by 1150 GMT—a sign investors were not yet panicking about the Russia-Ukraine tensions.

However the Japanese yen, a currency investors usually buy when they are nervous, hit its strongest since Feb. 7, with the dollar down 0.4 percent to as weak as 114.95 yen.