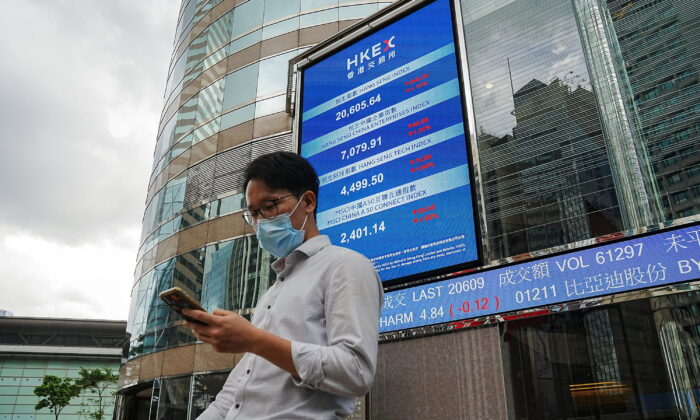 LONDON—Stocks and bonds steadied on Wednesday, while the dollar edged lower ahead of U.S. inflation data that could give clues to the Federal Reserve’s appetite for more aggressive rate rises.

The Consumer Price Index (CPI) report will be released at 1230 GMT, with markets watching for signs that inflation eased in July despite unexpectedly strong U.S. jobs numbers last week.

The market is pricing in a 69.5 percent chance of a 75 basis point rate increase at the Fed’s next meeting.

Economists polled by Reuters expect the CPI to show year-on-year headline inflation of 8.7 percent, far above the Fed’s target of 2 percent but down from last month’s red-hot 9.1 percent.

Europe’s benchmark STOXX index edged up 0.08 percent, after a 1 percent fall in the MSCI’s broadest index of Asia-Pacific shares outside Japan as Chinese inflation data pointed to prices rising 2.7 percent in July, below expectations.

“I don’t think that we are through the bear market woods yet—recession risks loom and I don’t think the Fed is done with its aggressive belt tightening,” said David Chao, a global market strategist for Asia Pacific ex-Japan at Invesco.

“I don’t think markets have fully discounted these variables. This week’s inflation data will certainly give us more clarity of the Fed’s near-term policy outlook.”

The dollar edged down, showing signs of resuming a retreat that began in the middle of July. The dollar index, which measures the greenback against six major peers, was down 0.24 percent at 106.1, possibly hinting at weaker CPI expectations.

Money markets in the bloc are now pricing in a 100 percent chance of a 50 basis-point hike from the ECB next month, up from 95 percent on Tuesday and around a 50 percent chance last week, the data showed.

Analysts noted the U.S. data due Wednesday represent a lagging indicator that might not yet show inflation softening, and yield curves could flatten or invert further.

A flattening yield curve is usually seen as a sign of an economic slowdown and inversions as predictors of recessions. As measured by the gap between two- and 10-year yields, the U.S. curve is deeply inverted at below minus 40 bps.

Gold also pared gains and was down 0.26 percent at $1,789.5 an ounce. It briefly broke through the $1,800 barrier overnight for the first time in more than a month.