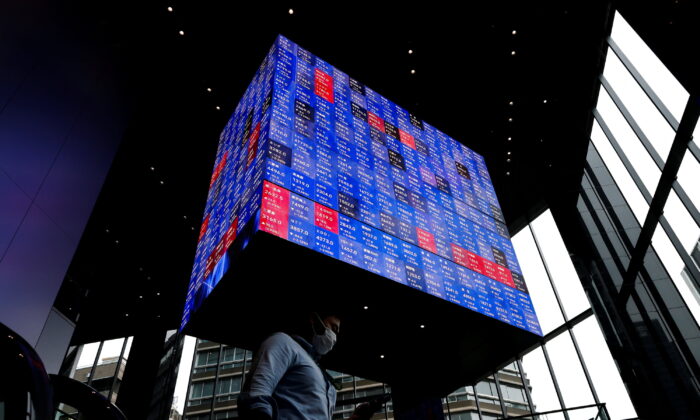 LONDON—Strong earnings at Credit Agricole and Lufthansa lifted stocks on Thursday as tension over Nancy Pelosi’s visit to Taiwan eased and markets bet the Bank of England will hike interest rates by the largest amount since 1995 to quell inflation.

Shares in Hong Kong rose 2 percent, tracking broader gains in Asia, reeling in some of the losses suffered after Sino–U.S. frictions flared over a visit to Taipei this week by House of Representatives Speaker Pelosi, which angered China.

Oil prices rebounded from six-month lows, while the dollar was underpinned by U.S. Federal Reserve officials pushing back against suggestions they will slow the pace of interest rate hikes, with one saying a 50 basis point hike would be “reasonable.” After large interest rate hikes by Fed and the European Central Bank to stop decades-high rises in prices, investors expect the Bank of England to follow suit with a 50 basis point increase when it announces the outcome of its monetary policy meeting at 1100 GMT.

Sterling could struggle in the absence of a hawkish surprise—especially as the British economic outlook is looking weak while U.S. data has offered some upside surprises.

“People are leaning towards a 50 basis point rise, a split decision probably. Then it’s really a matter of how to see the outlook going forward,” said Michael Hewson, chief markets analyst at CMC Markets.

“The UK economy is going into recession and there is nothing they can do about that and the Bank of England’s primary focus should be on pulling inflation down from its current levels, and frontload like the Fed is doing,” Hewson said.

A survey from the European Central Bank showed that consumers in the eurozone are bracing for the economy to shrink and for high inflation to continue.

S&P 500 futures were little changed ahead of Wall Street’s open, with Friday’s non-farm payrolls a key piece of data for the week.

No Earnings Reset Yet

Kasper Elmgreen, head of equities at asset manager Amundi, said the illusion that decades-high inflation would be transitory was now firmly gone as fuel bills surge and companies have difficulties finding staff.

“The big picture here is that it’s going to require quite a lot to restore price stability. The risk here is that we underestimate how powerful a force it is we are dealing with,” Elmgreen said.

The second quarter earnings season now underway has not provided a major “reset” to what Elmgreen sees as still too high earnings expectations for 2022 overall given the economy is slowing.

“I think that might come in the third quarter or fourth quarter as we start to see more demand impact,” Elmgreen said.

An ISM survey on Wednesday showed the U.S. services industry unexpectedly picked up in July, prompting a sell-off in bonds and rallies for U.S. stocks and the dollar, with the Nasdaq up 2.5 percent to a three-month high.

Fed officials have provided a hawkish chorus this week, battering the short end of the yield curve. Two-year Treasury yields were trading at 3.1040 percent, while the benchmark 10-year year yields traded at 2.7318 percent, both slightly weaker.

The dollar has halted a decline that began in the middle of July, with support from both hike expectations and heightened political tension.

Fed funds futures remain priced for rate cuts to be under way by the middle of next year and the inversion of the U.S. yield curve, with 10-year yields below two-year yields, suggests investors think that the hiking path will hurt growth.

“I think the market’s going to remain choppy,” said David Ratliff, head of banking and capital markets for Asia Pacific at Wells Fargo in Hong Kong. “People are starting to read through the current round and pace of Fed tightening.”