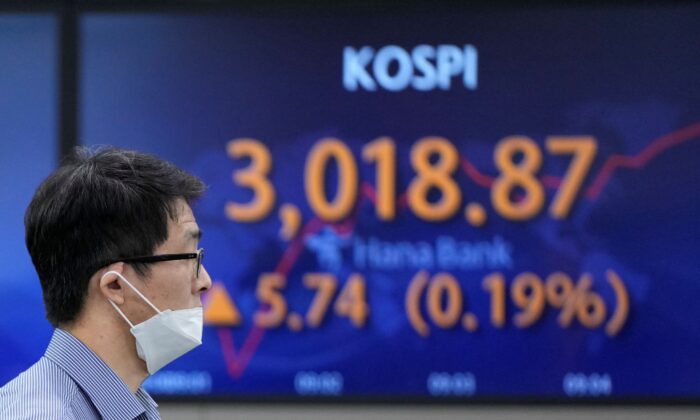 LONDON—World stocks slipped on Thursday as the upbeat mood that carried the Dow Jones and bitcoin to records a day earlier ran out of steam, while a pause in the oil rally stalled rising global bond yields.

Turkey’s lira was backsliding towards record lows with the central bank expected to chop its interest rates again later and China Evergrande was back in the firing line after it had been forced to abandon a $2.6 billion stake.

Other risk and commodity sensitive currencies such as the Australian and New Zealand dollars and South African rand also hit a speed bump, giving the safe-haven Japanese yen a rare lift after it had fallen to a four-year low versus the dollar.

“There is little bit of risk aversion,” said Societe Generale’s Kit Juckes, who pointed to the higher yen and the fact that both European stocks and Wall Street S&P 500 futures were both in the red.

“I think most people today are going to be looking at the Turkey central bank meeting to see if sparks are going to fly… other than that the themes (of rising inflation and COVID cases) are pretty much set.”

Commodities also eased, with Brent crude futures down 0.2 percent after touching a three-year top and Chinese coal futures extending a sharp pullback after Beijing had signalled it would intervene to cool prices.

“The U.S. stock market has gone up for six days in a row, bitcoin’s made a record and the U.S. bond market is calm. On the surface it looks benign,” said Andrew Ticehurst, a rates strategist at Nomura in Sydney.

“But below the surface we are uncomfortable about a number of things,” he added, chiefly the slowdown in China’s economy seen in data earlier this week and concerns about potential fallout from Evergrande’s troubles.

Evergrande will default on $19 billion of international market bonds if it doesn’t make an already overdue coupon payment by Monday. It would the biggest ever Chinese default and one of the world’s largest too. Lehman Brothers’ collapse added up to $35 billion.

Late on Wednesday, Evergrande confirmed its plans to sell a $2.6 billion stake in its property services unit had fallen through. Its shares ended down 11.5 percent in Hong Kong on Thursday, although it wasn’t all bad news.

Financial news provider REDD reported that it had secured an extension on one of its lower-profile bonds.

Shares in rival Chinese developers also drew support after reassurances from a number of top Chinese authorities that the trouble in the sector would not be allowed to escalate into a full-blown crisis, but global investors remain nervous.

Turkey’s lira dropped 0.7 percent against the dollar and was the worst performer in FX markets as bamboozled traders expected the central bank to once again fly in the face of economic orthodoxy and cut its 18 percent interest rates.

It did so last month and the lira has hit a string of record lows in recent sessions after another major ousting of central bank policymakers last week left investors doubting the bank’s independence from the government.

“We have seen strong outflows from debt in the last three weeks, probably due to uncertainty with the currency and increased risk perception,” IIF economist Jonathan Fortun told Reuters.

Wall Street futures were down 0.3 percent after a blizzard of earnings had helped the Dow Jones touch an all-time high on Wednesday, with the S&P 500 within touching distance too.

The VIX volatility index, sometimes referred to as Wall Street’s “fear gauge”, also ticked up having dropped to a two-month low the previous day.

But a soft finish on the Nasdaq flowed through to tech-stock selling in Tokyo and in Hong Kong, where the Hang Seng fell 0.8 percent.

The benchmark 10-year yield hovered at 1.6568 percent, just below the previous day’s five-month high of 1.6730 percent, while Germany’s 10-year yield, the benchmark for Europe, was unmoved at a still negative -0.12 percent.

“The strong focus on the volatile (bond) curve environment in the euro area looks set to stay, at least until next week’s ECB Governing Council meeting,” UniCredit analysts told clients.

Investors have figured that surging energy prices and tightening job markets will pressure top central banks such as the U.S. Fed and ECB to either raise interest rates or at least rein in stimulus.

Fed funds futures have priced a 25 basis point U.S. rate hike in the third quarter of 2022 while eurodollar markets expect higher rates as soon as the second quarter.