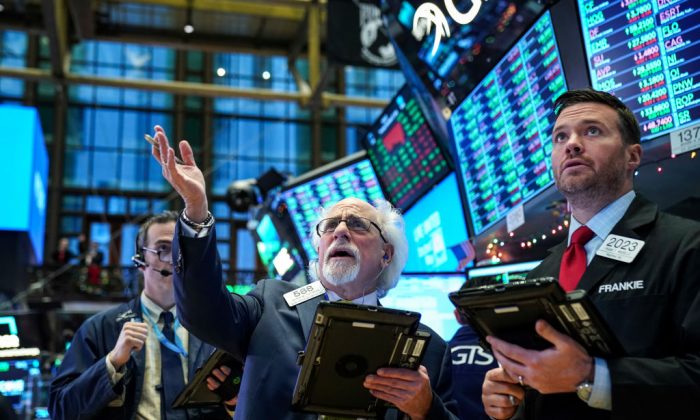 South Korea reported 231 new cases, taking its total to 833. Iran, which announced its first two cases on Feb. 19, said it now had 61 cases and 12 deaths, though a lawmaker put the number of deaths at 50. Europe’s biggest outbreak is in Italy, with some 150 infections—compared with just three before Feb. 21—and a sixth death. Authorities have placed dozens of towns there on lockdown.

European share markets suffered their biggest slump since mid-2016, while the S&P 500, a stock market index that tracks the stocks of 500 large-cap U.S. companies and is a key measure of U.S. equity market health, fell more than 3 percent at its session low on Feb. 24, before closing at 3,225.89.

On Feb. 19, the S&P 500 hit a new all-time high before dipping about 1 percent on Feb. 21, which coincided with an uptick in reported virus infections.

The Dow Jones and Nasdaq followed a similar dynamic Feb. 24, with the former down around 3.56 percent and the latter 3.71 percent in the red. The Dow turned negative for 2020, down 2 percent year-to-date.

Safe-havens like precious metals saw inflows on Feb. 24, with silver up 1.72 percent and gold shooting up to a seven-year high.

U.S. Treasuries, another asset class popular with investors seeking near risk-free refuge, also absorbed a wave of shifting capital on Feb. 24. The yield on the 10-year Treasury—which moves inversely to price—fell to a low not seen since July 2016, while the 30-year Treasury hit a record low.

“An old Wall Street adage posits that ‘markets dislike uncertainty’ and there is a great deal of uncertainty regarding the extent of the spread of the virus, its effect on global supply chains, and ultimately on the world economy,” Robert Johnson, professor of finance at Heider College of Business, Creighton University, told The Epoch Times.

“Compounding the problem is the lack of transparency on behalf of the Chinese government and whether the impact is perhaps more serious than is being reported.”

“It has all of us who look at these numbers scratching our heads—we cannot tell whether the transmission of the virus has been reduced because of the quarantine,” William Schaffner, a professor at the division of infectious diseases at the Vanderbilt University School of Medicine and the medical director at the National Foundation for Infectious Diseases, told The Epoch Times.

“We can’t tell because they keep counting cases in a different way.”