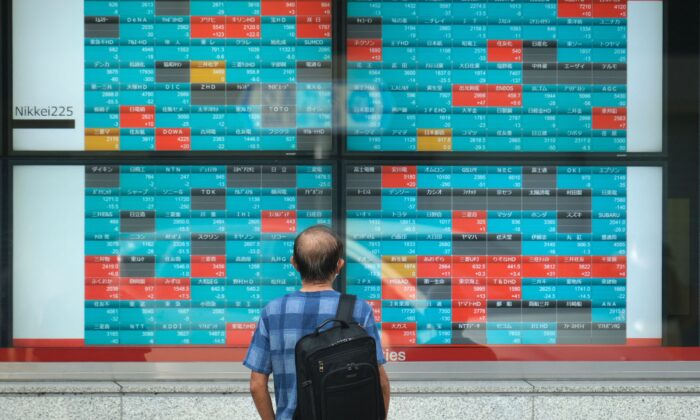 A pedestrian looks at an electronic quotation board displaying compnaies' stock prices of the Tokyo Stock Exchange in Tokyo, Japan on Oct. 5, 2021. (Kazuhiro Nogi/AFP via Getty Images)
Markets

The Euro STOXX 600 fell 1.8 percent, denting gains made in its best day in 11 weeks on Tuesday, with tech stocks down more than 2 percent and Germany leading losses at 1.6 percent.

The mood was set to hit Wall Street, where U.S. futures gauges pointed to losses of 0.9 percent–1.1 percent.

Concerns about energy supply and a decision on Monday by producers to stick to a planned output increase rather than raising it further were behind the increases.

“Higher oil―and commodity prices in general in terms of gas and oil―are feeding through into higher bond yields, because it has an inflationary implication,” said Mike Bell, global market strategist at JP Morgan Asset Management.

“The market is looking at that and thinking ‘is there a scenario in which inflation that everyone has said might be transitory, being a little bit more persistent?'”

Benchmark 10-year yields rose 4.5 basis points to hit 1.573 percent during the Asia session, having climbed nearly 11 bps in three days. They were last at 1.5519 percent.

Yields on 20-year and 30-year Treasuries also jumped to their highest since June.

Benchmark euro zone bond yields rose to new highs, with markets fearing inflation will be stickier than expected. Germany’s 10-year yield, the benchmark of the bloc, rose to its highest since late June.

“Growth started to peak 3–4 months ago but between last November and April this year markets got used to every data point exceeding expectations,” said Grace Peters, EMEA head of investment strategy at JP Morgan Private Bank.

“From April to the present day we are getting more data volatility and data that’s more open to interpretation. So the market is concerned about the glide path from here.”

Chinese markets remained closed for a public holiday, and shares of cash-strapped developer China Evergrande were suspended having stopped trading on Monday pending an announcement of a significant transaction.

Dollar Up, Kiwi Down

The dollar edged higher against a basket of other major currencies, supported by rising yields, and was heading back towards a one-year high hit last month.

The dollar rose 0.3 percent to 94.0232, gaining momentum during European hours.

The New Zealand dollar extended losses as U.S. yields rose after barely budging on the Reserve Bank of New Zealand lifting its official cash rate for the first time in seven years.

The euro was pinned below $1.16 and was last down 0.2 percent, scarcely higher than the 14-month low it struck last week.

By Tom Wilson and Alun John