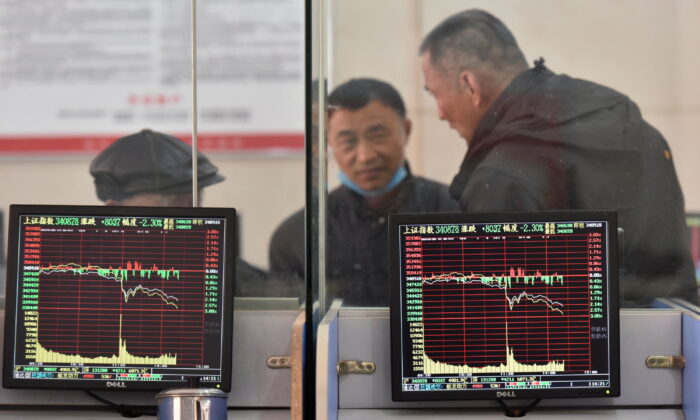 Stocks Slide, Dollar Spikes as September Starts With a Bump

LONDON—September got off to a bumpy start as persistent worries about rising global interest rates and recessions hounded stock and bond markets on Thursday and drove the safe-haven U.S. dollar to a 24-year high against the yen.

Near 1 percent falls in London, Frankfurt, Paris, and Milan pushed the STOXX 600 to its lowest since mid-July, and bond market selling continued after the biggest monthly rout in decades.

The bearishness was being fed by the possibility that the European Central Bank will raise its policy rate by a record 75 basis points next week following Wednesday’s record high inflation reading.

Heavy shelling at Ukraine’s giant Zaporizhzhia nuclear plant rattled nerves too. Russia had shut its main gas pipe to Europe for maintenance, while veteran investor Jeremy Grantham warned of an “epic finale” to the stock market “superbubble” inflated by years of cheap money.

“The whole world is now fixated on the growth-reducing implications of inflation, rates, and wartime issues such as the energy squeeze,” Grantham said.

Add to that COVID in China, food and energy crises” the outlook is far grimmer than could have been foreseen,” he added.

In currency markets, the dollar advanced 0.4 percent to a 24-year high of 139.5 yen as investors braced for higher U.S. rates while expecting anchored Japanese rates to go nowhere anytime soon.

The euro and sterling also fell as much 0.4 percent against the greenback. It left the euro just above parity at $1.0035, while the risk-sensitive Australian and New Zealand dollars hit their lowest levels since July.

Bets on a bumper ECB move next week were gaining traction too. Eurozone money markets were now pricing in a roughly 80 percent chance of a record 75 basis point hike up from 50 percent earlier in the week.

That sent benchmark German Bund yields to over 1.63 percent. Italy’s 10-year bond yield jumped 8 basis points to its highest since mid-June at 3.978 percent, and the closely-watched gap between German and Italian bond yields expanded to its widest since late July.

Asian stocks slid as investors there also sold everything risky that was not nailed down.

Japan’s Nikkei skidded 1.5 percent and Hong Kong’s Hang Seng index fell 1.8 percent, while Chinese blue-chips ended down 0.9 percent having been anchored earlier in the session by hopes for more economic stimulus from Beijing.

“August has been a terrible month for balance fund investors with no diversification gains from holding a portfolio of equities and bonds,” Rodrigo Catril, senior FX strategist at National Australia Bank, said in a note to clients.

“Month end yields no surprises, but rather an extension of the major themes seen during August with further increases in core global bond yields and weaker equities.”

Overnight, Cleveland Fed President Loretta Mester had said the U.S. central bank would need to boost interest rates somewhat above 4 percent by early next year and hold them there in order to bring inflation back down to the Fed’s goal. She also warned that the risks of recession over the next year or two had moved up.

U.S. futures were pointed lower again too after stocks there had ended the month with the worst August performance in seven years. For the month, the Dow Jones Industrial Average fell 4.06 percent, the S&P 500 4.24 percent, and the Nasdaq 4.64 percent.

Markets are awaiting U.S. non-farm payrolls data on Friday and they may not like a strong number if it supports the basis for a continuation of aggressive rate hikes, which could further boost the U.S. dollar.

“What are we telling our clients and stakeholders is that we should be watching the labour market … if the labour market starts to weaken, that’s a sign that consumer sentiment is starting to weaken and that is a very strong indication that we’re likely going into a recession scenario,” said Paul Gruenwald, global chief economist at S&P Global Ratings.

Among the main commodities, Brent crude declined 1.6 percent to $94.09 per barrel. U.S. crude fell to $88.07 a barrel, while European gas prices fell back 4 percent as markets got used to Russia’s halt in supplies.

Gold was slightly lower at $1,703.9 per ounce, but industrial metals all took a heavy pounding with tin down 8 percent, zinc down 5.3 percent, and copper down 1.75 percent.