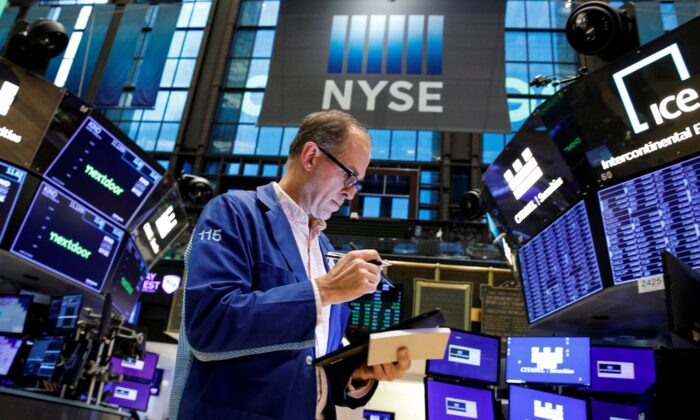 A trader works on the floor of the New York Stock Exchange (NYSE) in New York City on Nov. 8, 2021. (Brendan McDermid/Reuters)
Markets

NEW YORK/LONDON—A gauge of global stock markets edged lower and the dollar built on earlier gains on Wednesday after U.S. consumer inflation surged to its highest since 1990, raising concern the Federal Reserve will tighten monetary policy sooner than expected.

Real yields on U.S. Treasuries slid to record lows and gold prices reversed course to rise more than 1 percent as another jump in the consumer price index in October bolstered the metal’s appeal as a hedge against inflation.

CPI jumped 0.9 percent after climbing 0.4 percent in September, the Labor Department said, as the largest gain in four months boosted the index’s annual increase to 6.2 percent. It was the biggest year-on-year rise since November 1990 and followed a 5.4 percent leap in September.

The U.S. consumer price index rose 0.9 percent in October after gaining 0.4 percent in September, accelerating 6.2 percent in the 12 months through October, the largest year-on-year advance since November 1990. Economists polled by Reuters had forecast the overall CPI rising by 0.6 percent and the core CPI by 0.4 percent.

“It’s clear that the rate of inflation and the persistence of elevated inflation are much more than what policymakers and markets had expected,” said Joseph LaVorgna, chief economist for the Americas at Natixis in New York.

Paul Nolte, portfolio manager, Kingsview Asset Management in Chicago, said the Fed is now behind the curve. “They may now be forced into raising rates sooner rather than later,” he said.

The dollar index, which tracks the greenback versus a basket of six currencies, rose 0.605 percent to 94.577.

The yield on 10-year Treasury Inflation Protected Securities dipped as low as -1.243 percent and the yield on 30-year slid as low as -0.607 percent, both records, in morning trading.

The 10-year TIPS breakeven rate was last at 2.72 percent, indicating the market sees inflation averaging about 2.7 percent a year for the next decade.

Euro zone bond yields also ticked up, with Germany’s 10-year yield, the benchmark for the bloc, up 3.4 basis points at -0.259 percent, above a seven-week low of -0.299 percent touched on Tuesday.

By Herbert Lash and Carolyn Cohn