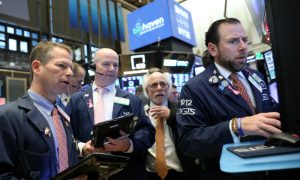 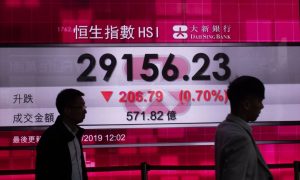 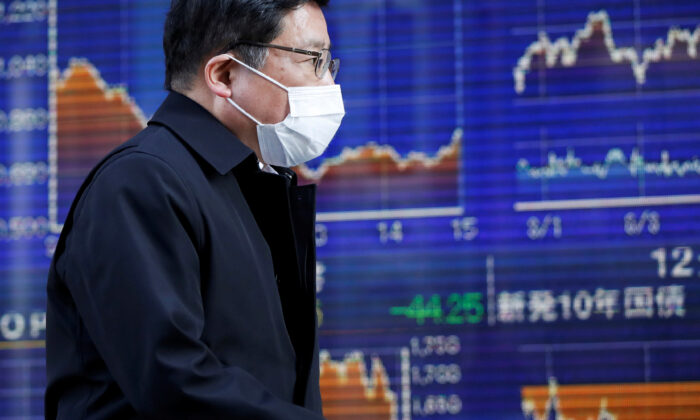 A passerby wearing a protective mask, following an outbreak of the coronavirus, walks past an electronic board showing the graphs of the recent movements of Japan's Nikkei share average outside a brokerage in Tokyo on March 6, 2020. (Issei Kato/Reuters)
Markets

LONDON/TOKYO—Global stocks stumbled back into the red on Wednesday with Wall Street futures pointing to more losses ahead as fears over the coronavirus fallout eclipsed large-scale support measures rolled out by policymakers around the globe.

Some traditional safe-haven assets such as gold were also under pressure as battered investors looked to unwind their damaged positions.

Oil prices fell for a third session with U.S. crude futures tumbling to a 17-year low.

“Another remarkable day in what is clearly fin-de-regime,” Rabobank’s global strategist Michael Every wrote in a note.

“Things have already irrevocably changed and whipsaw market action reflects that this is the case. The only issue is how much further they change from here, and hence where markets settle.”

European equity markets suffered hefty losses with London and Frankfurt down 3.5 percent in early trade while Paris and Milan slipped around 3 percent.

Losses were set to extend to Wall Street with U.S. stock futures indicating as much as 4 percent lower and hitting their daily low limit just a day after the S&P 500 rose 6 percent and Dow Jones rose 5.2 percent or 1,049 points.

“A rise of 1,000 points in Dow is something you see only during a financial crisis. It is not a good sign,” said Tomoaki Shishido, senior fixed income strategist at Nomura Securities.

“A rise of 100 points would be much better for the economy.”

Big price swings have left market participants nursing losses, making them reluctant to jump back into the market and thereby reducing trading volume.

Tuesday’s Wall Street gains came as policymakers cobbled together packages to counter the impact of the virus.

The Trump administration unveiled a $1 trillion stimulus package that could deliver $1,000 checks to Americans within two weeks to buttress a virus-stricken economy.

Britain launched a £330 billion ($400 billion) rescue package for businesses threatened with collapse, while France, which went into lockdown on Tuesday, is to pump 45 billion euros ($50 billion) of crisis measures into its economy to help companies and workers.

Still, forecasters at banks are projecting a steep economic contraction in at least the second quarter as governments take draconian measures to combat the virus, shutting restaurants, closing schools, and calling on people to stay home.

“While markets react to positive news on stimulus, that doesn’t last long. I think there are a lot of banks and investors whose balance sheet was badly hit and they still have lots of positions to sell,” said Shin-ichiro Kadota, senior currency and rates strategist at Barclays.

That lifted high-grade euro zone government bonds yield, led by Germany, where yields rose nine basis points to the highest level in over a month at -0.342 percent.

Italian government bonds gained some respite after several sessions of relentless selling, with yields falling between two and six basis points across the curve.

Benchmark U.S. 10-year Treasury yield edged up to a fresh three week high of 1.2080 after the Fed move eased some market jitters, while U.S. 30-year bond yields climbed as high as 1.8380 percent.

In currency markets, the safe-haven yen gained sharply while the dollar held onto hefty overnight gains against other currencies.

Oil prices fell as the outlook for fuel demand darkened with travel and social lockdowns triggered by the coronavirus epidemic.

By Karin Strohecker and Hideyuki Sano