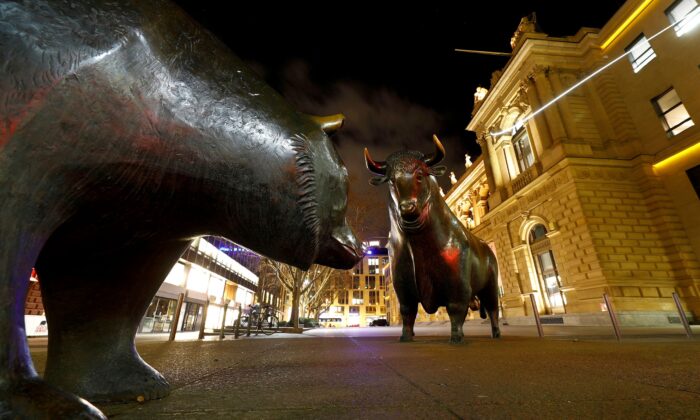 Bull and bear symbols for successful and bad trading are seen in front of the German stock exchange (Deutsche Boerse) in Frankfurt, Germany on Feb. 12, 2019. (Kai Pfaffenbach/Reuters)
Markets

LONDON—European stocks sank to two-month lows on Friday after slides in Asia and on Wall Street, with euro zone inflation data expected to hit a 13-year high to compound investor fears over surging prices combining with stuttering growth.

On the first day of October, the month for some of history’s most infamous market routs, the STOXX index of 600 companies fell 0.9 percent, hitting its weakest level since mid-July.

The MSCI’s gauge of stocks across the globe shed 0.4 percent, with U.S. stock futures pointing to further falls.

“There is a sense that with October’s reputation, worries about surging energy prices, supply chain disruptions, concerns about inflation and power shortages, October could be a fairly windy affair,” Hewson said.

Flash estimates of headline euro zone inflation are due at 0900 GMT, with UniCredit expecting a year-on-year rise to 3.3 percent, which would be its highest level since 2008.

“We expect headline inflation to peak in November at close to 4 percent,” UniCredit analysts said in a note.

U.S. stock futures pointed to a 0.60 percent decline for the S&P 500, following a 1.19 percent drop in the index overnight that punctuated its worst month since March of last year.

The dollar, however, began the last quarter of 2021 near its highest levels of the year, and heading for its best week since June as currency markets braced for U.S. interest rates to rise before those of major peers.

The dollar index, which measures the currency against six major rivals, was off Thursday’s one-year high of 94.504, last changing hands at 94.287. Meanwhile, the benchmark 10-year U.S. Treasury yield was at 1.5013 percent.

In Asia, Japan’s Nikkei tumbled 2.3 percent to the lowest level since Sept. 3. An MSCI index of Asia-Pacific stocks slid 1.22 percent to its lowest since Aug. 24.

Chinese markets are closed for a week from Friday for the Golden Week holiday.

The debate over whether rising inflation mixed with patchier growth was a recipe for stagflation continued.

Federal Reserve Chair Jerome Powell said on Wednesday that resolving “tension” between high inflation and high unemployment is the Fed’s most urgent issue, acknowledging a potential conflict between the U.S. central bank’s two goals of stable prices and full employment.

The latest clues on the Fed’s policy normalisation path come with U.S. personal spending and core consumption deflator data later in the day.

Crude prices continued to ease after Brent topped $80 a barrel earlier in the week for the first time in three years.

Gold, despite being traditionally an inflation hedge and safe haven, eased 0.26 percent to $1,752 an ounce, following Thursday’s 1.77 percent surge, the biggest since March.