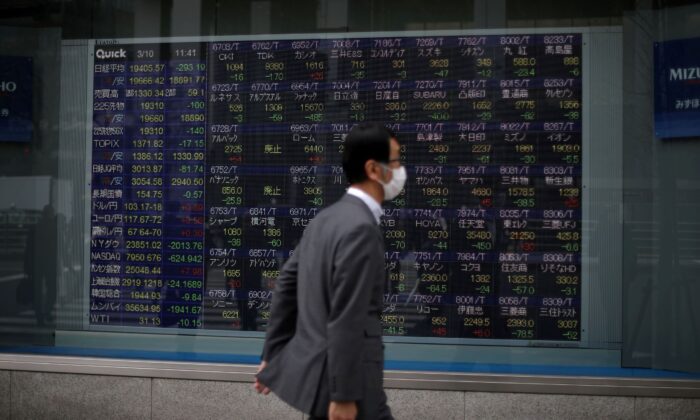 A man wearing a protective face mask walks in front of a stock quotation board outside a brokerage in Tokyo, Japan, on March 10, 2020. (Stoyan Nenov/Reuters)
Stocks

LONDON—Stocks extended their losses for the week on Friday as investors piled into government bonds and gold for cover while scrutinizing the latest twists in Russia’s escalating invasion of Ukraine, which included seizing a huge nuclear plant.

In Europe, the STOXX index of 600 companies was sank 1.4 percent to 431 points, hitting a new low for the year as the benchmark eyed correction territory, meaning down 10 percent from its highs.

The MSCI All Country stocks index shed 0.6 percent to 686 points, down about 10 percent for the year.

With a 25 basis point interest rate increase by the Federal Reserve later this month now all but certain, economic data like U.S. non-farm payrolls on Friday before the opening bell on Wall Street were taking a back seat, said Michael Hewson, chief markets analyst at CMC Markets.

“The market is driven so much by news headlines risk that the fundamentals barely matter at the moment,” Hewson said.

Even though U.S. rates were set to rise, investors were still piling into government bonds for safety, he said.

“You have escalating inflation risk, you have huge uncertainty about what’s going to happen next on the headline front, and a Russian president who wouldn’t rule out nuclear weapons—that is a pretty toxic backdrop,” Hewson said.

Crude oil rebounded, and aluminium touched a record high of $3,850 a tonne in London as the intensifying conflict in Ukraine stocked fears of a supply squeeze in the metal from Russia, a major producer.

“People came into this situation thinking commodities had had enough of a run already but the war has added a new lease of life,” said Mike Kelly, head of global multi-asset at PineBridge Investments.

“Skyrocketing inflation is what people fear and the best hedge for that is energy and industrial metals,” said Mike Kelly, head of global multi-asset at PineBridge Investments.

In currency markets, the euro lost further ground and was set for its worst week versus the dollar in nearly two years as the prospect of sustained high commodity prices continued to drag on expectations of European economic growth.

S&P 500 futures and Nasdaq futures were down around 0.5 percent.

The fire that broke out in a training building near the Zaporizhzhia nuclear power plant, the largest of its kind in Europe, during fighting between Russian and Ukrainian forces was later extinguished, authorities said on Friday.

While that helped ease some of the initial panic that hit markets in Asia, investors remain extremely anxious about the conflict.

“Markets are worried about nuclear fallout. The risk is that there is a miscalculation or over-reaction and the war prolongs,” said Vasu Menon, executive director of investment strategy at OCBC Bank.

MSCI’s broadest index of Asia-Pacific shares ex-Japan tumbled as much as 1.5 percent to 585.6, the lowest level since November 2020, taking the year-to-date losses to 7 percent.

Stock markets across Asia were in a sea of red, with Japan losing 2.2 percent, South Korea 1.1 percent, China 0.9 percent, and Hong Kong 2.5 percent while commodities-heavy Australia was down 0.6 percent. Investors sought refuge in safe-haven U.S. Treasuries, sending yields on benchmark 10-year yields lower to 1.788 percent. Oil prices firmed, with the market also focused on whether the OPEC+ producers, including Saudi Arabia and Russia, would increase output from January.

On the economic data front, the U.S. employment report on Friday is expected to show another month of strong job growth, with a wave of Omicron COVID-19 variant infections significantly diminished.