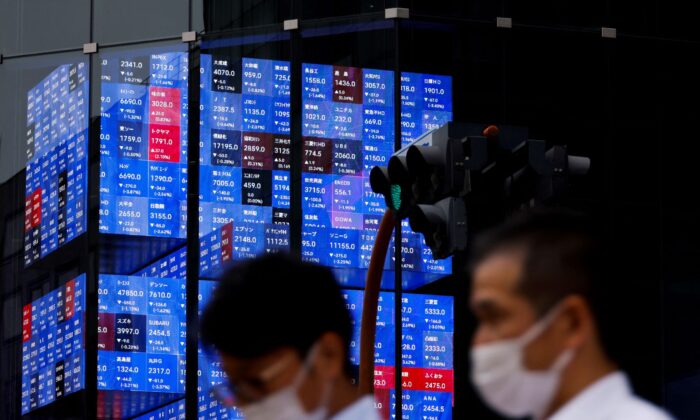 Stocks and Euro Slip Ahead of Key US Inflation Data

LONDON— Stocks slipped on Wednesday and the euro lurked just above parity against the dollar, as traders waited to see if U.S. inflation data later bolsters the case for another supersized Federal Reserve rate hike this month.

Recession worries meant Europe stumbled out the blocks after a relatively steady session in Asia Pacific where South Korea and New Zealand had jacked up their rates again.

Germany’s DAX and Italy’s FTSEMIB were both down over 1.2 percent early on. London’s FTSE was not far behind, while the euro teetered at $1.0025 as gas and oil prices rose again.

Copper, which is attuned to global growth, had hit a 20-month low too.

UK economic growth data delivered an unexpected rise but investors were far more focused on whether the U.S. inflation numbers later show it pushing toward 9 percent, which would be its highest since 1981.

“Markets have been held up a bit in terms of parity in euro-dollar but we still have an incredible number of moving parts,” Societe Generale’s Kit Juckes said, explaining that the higher the U.S. inflation numbers, the clearer it will be that the Fed will crack on with rate hikes.

It increased them by a supersized 75 basis points at its last meeting, its first move of that scale since 1994.

“If that (high inflation reading) happens today, that could get the bond market a bit nervous again, invert the U.S. yield curve more and send the euro decisively through parity,” Juckes said.

Underscoring the global inflation concerns, South Korea’s central bank on Wednesday raised rates by 50 basis points, the biggest increase since the bank adopted its current policy system in 1999, and New Zealand’s central bank also increased rates by the same amount for the third time in a row to 2.5 percent.

Bond market recessionary warning signs are now flashing “with growing alarm,” Deutsche Bank’s Jim Reid said. One in particular is the 2 year/10 year U.S. Treasury curve, which has inverted before every one of the last 10 U.S. recessions, and remains near its most inverted of this cycle so far at -8.5 bps.

Wall Street futures were pointing to marginally higher starts for the main S&P 500, Nasdaq, and Dow Jones indexes after a late slump on Tuesday.

Overnight, MSCI’s broadest index of Asia-Pacific shares outside Japan gained 0.5 percent, snapping two straight days of losses and having slumped to its lowest in two years the day before.

Taiwanese stocks led the gains after Taiwan’s finance ministry said on Tuesday evening it would activate its stock stabilization fund. The market had fallen to a 19-month low that day.

Japan’s Nikkei finished up 0.5 percent after it had lost nearly 2 percent the previous day.

“Sharp weakness in oil prices in July suggests that June’s (inflation) may mark a peak, however. If so, the most dynamic phase of Fed tightening could conclude with a 75bps rate rise on 27 July,” analysts at ANZ said.

“However, our expectation is that underlying strength in core inflation and still deeply negative real policy rates means 50bps rate rises will still be appropriate after the summer.”

Worries that higher rates could bring the global economy to a standstill, or even worse into recession, has been the key driver behind both the 20 percent slump in world stocks this year and the surge in the safe-haven U.S. dollar.

The euro, which is down over 11 percent since January was last at $1.0025, as investors remained focused on whether it would fall below one U.S. dollar for the first time since 2002.

The dollar was also firm on other peers, and its index measure against major rivals was holding solidly at 108.27.

Leading cryptocurrency bitcoin was up 0.23 percent and looked on track to snap a three-day losing streak, though at $19,478.89 was still trading below the key psychological $20,000 mark.