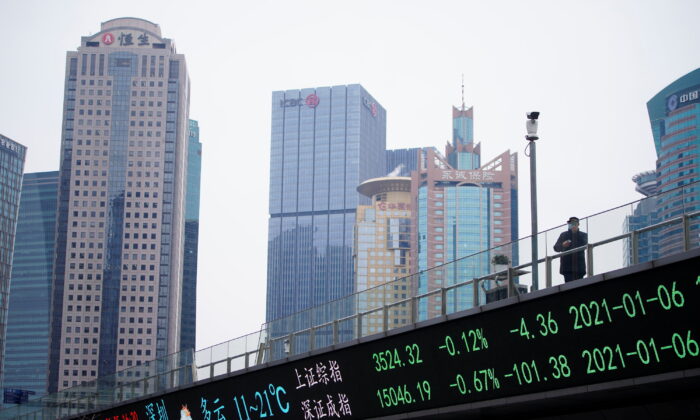 A man wearing a face mask, following the coronavirus disease (COVID-19) outbreak, stands on an overpass with an electronic board showing Shanghai and Shenzhen stock indexes, at the Lujiazui financial district in Shanghai, China, on Jan. 6, 2021. (Aly Song/Reuters)
Stocks

LONDON—World stocks slumped on Monday as the growing risk of more aggressive interest rate hikes in the United States and Europe inflicted fresh pain on bond markets and pushed the dollar to new 20-year highs, just as recession fears mount.

Federal Reserve Chair Jerome Powell, speaking at the Jackson Hole symposium on Friday, said the Fed would raise rates as high as needed to restrict growth, and keep them there “for some time” to bring down inflation running well above its 2 percent target.

European Central Bank board member Isabel Schnabel added to market unease. She warned on Saturday that central banks risk losing public trust and must act forcefully to curb inflation, even if that drags their economies into a recession.

As investors woke up to the reality that rates would stay higher for longer even as recession risk grows, two-year U.S. treasury yields rose to their highest since 2007.

European stocks slumped to their lowest level in almost six weeks and were last down 1 percent. U.S. stock futures were deep in the red and Japan’s blue-chip Nikkei slid over 2.5 percent.

London markets were closed for a holiday, while MSCI’s world equity index fell 0.7 percent to a one-month low.

“The message from Jackson Hole was loud and clear and not what markets were expecting,” said Nordea chief analyst Jan von Gerich.

“Central banks need convincing evidence that inflation is coming down. That is bad news for the economy and risk appetite and raises the risk of a deeper recession if we get more rapid rate hikes.”

Investors ramped up U.S. and eurozone rate hike bets, with markets pricing in a greater chance of 75 basis point hikes from the Fed and ECB in September.

Fed funds futures priced in as high as a 73 percent chance the Fed will hike by 75 bps and see rates peaking at 3.75 percent to 4.0 percent.

“Markets are focusing on discussing the message of ‘coordinated tightening’ from Jackson Hole as ECB and Fed appear to have re-committed to creating price stability: yields are shooting higher and risk assets are quite a bit lower since last week,” said Lars Sparreso Lykke Merklin, senior analyst at Danske Bank.

Much might depend on what U.S. August payrolls figures show this Friday. Analysts are looking for a moderate rise of 285,000 following July’s blockbuster 528,000 gain.

As investors hunkered down for front-loaded rate hikes, key gauges of equity market volatility shot up.

Two-year U.S. yields surged to around 3.49 percent, the highest since late 2007 and far above the 10-year at 3.13 percent. Yields also jumped across Europe.

This all benefited the safe-haven dollar, which shot to a fresh two-decade peak at 109.48 against a basket of major currencies.

“Energy security fears will remain front and centre this week as Gazprom will shut its mainline pipeline to deliver gas to Western Europe for three days from 31 August to 2 September,” said Joseph Capurso, head of international economics at CBA, referring to supplies from Russian gas giant Gazprom.

“There are fears gas supply may not be turned back on following the shutdown.”