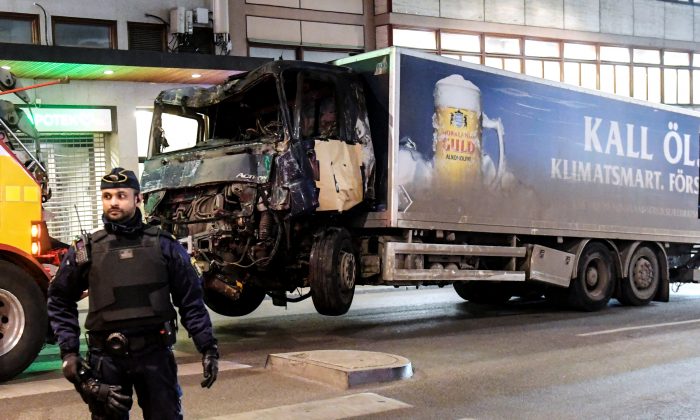 Tow trucks pull away the beer truck that crashed into the department store Ahlens after plowing down the Drottninggatan Street in central Stockholm, Sweden on April 8, 2017. (Maja Suslin/TT News Agency/via Reuters)
International

HJULSTA, Sweden—The arrested man suspected by police of killing four people by ramming a truck into crowds in Stockholm is a 39-year-old from Uzbekistan who had been denied permanent residency in Sweden and who had expressed sympathy for the ISIS terrorist group.

Two sources who had worked with the suspect, Rakhmat Akilov, independently identified him to Reuters from images distributed by police as the manhunt got underway on Friday.

Two police spokespersons declined to confirm his identity as did the suspect’s court-appointed lawyer.

A former co-worker of Akilov contacted by Reuters said Akilov had never expressed any religious views and also said that the man he shared a flat with near Stockholm was said to be “devastated” to hear Akilov may be responsible for the attack.

Akilov was detained at around 9 p.m. local time (1900 GMT) on Friday in a northern Stockholm suburb hours after police say he hijacked a truck and plowed through a pedestrian shopping street in central Stockholm, killing four and injuring 15.

Police said he had previously turned up in information gathered by Swedish security services. “He was a marginal character,” said Sweden’s national police chief Dan Eliasson. He did not figure in any of their investigations immediately prior to the attack.

Police have also said the suspect had shown sympathy for extremist organizations, including ISIS, and that he was wanted for failing to comply with a deportation order after his application for residency was denied.

Akilov’s former co-worker, who had worked with him at a construction company in Sweden and did not wish to be named, said Akilov was a father who sent money home to a wife and several children living in Uzbekistan.

Swedish Security Police spokesman Simon Bynert said the suspect had been involved in an asylum process in Sweden, but that the security police had not been part of it.

Akilov’s Facebook page shows he was following a group called “Friends of Libya and Syria”, dedicated to exposing “terrorism of the imperialistic financial capitals” of the United States, Britain, and Arab “dictatorships”.

The page features two videos, one on the double standards on what constitutes terror and how Muslims are victimized, and the other about a man with his family in the Iraqi city of Mosul calling others to join the ISIS terrorist group.

Akilov worked at the construction company for a few months last year.

“He never expressed any radical or religious views. He was like any normal guy,” the former co-worker at the company told Reuters.

He said that Akilov’s flatmate in Varberg, south of Stockholm, was devastated and moved out as soon as he heard reports Akilov may have been involved in the attack.

Akilov—or someone with the same name—appears to be listed as living at another address in the northern Stockholm suburb of Hjulsta. No one replied to enquiries at that address when a Reuters reporter visited the low-rise red building with white balconies overlooking a children’s playground.

Akilov was also following a group on Facebook calling for the removal of former Uzbek president Islam Karimov, who died last September, as well as a group giving information on how to emigrate to the United States and Canada.

Akilov’s Facebook page listed him as born in the Uzbek city of Samarkand, the central Asian country’s second-largest city and one of the main stops on the ancient Silk Road.