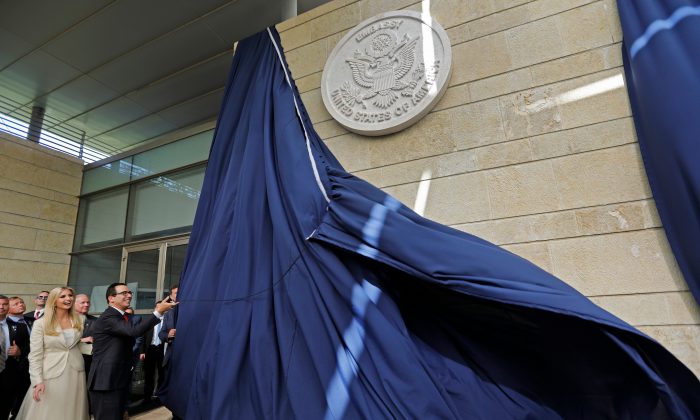 US Treasury Secretary Steve Mnuchin and US President's daughter Ivanka Trump unveil an inauguration plaque during the opening of the US embassy in Jerusalem on May 14, 2018. MENAHEM KAHANA/AFP/Getty Images
Viewpoints

The Jerusalem Embassy Act was passed in the United States on Oct. 23, 1995, to some fanfare as well as protests, after which it was quickly placed on the back burner to languish.

The conservative Congress at the time knew all too well how the political system works and slipped in a hidden gem, or poison, depending on your perspective. The law required the move to Jerusalem but allowed the president the use of six-month waivers, based on “national security” grounds.

The waiver was used repeatedly by Presidents Bill Clinton, George W. Bush, and Barack Obama, and so the law was never implemented, remaining on that pesky back burner. Then, along came President Donald Trump, who also initially signed the six-month waiver. But he’s his own man and a pragmatist before he’s a politician.

On Feb. 23, 2018, Trump announced that the U.S. Embassy in Israel would move to Jerusalem. The U.S. Embassy officially relocated to Jerusalem on May 14, 2018, on the 70th anniversary of the Israeli Declaration of Independence. It’s been high drama on the world stage since with riots, people hurt or killed, and condemnation from both the EU and U.N.

The fact is, Jerusalem is the capital of Israel, regardless of the location of anyone’s embassy. It’s ultimately an empty gesture to pretend otherwise, and for the United States to do so merely maintains the stalemate that’s existed for decades and only benefits the Palestinian obstructionists. Ever the negotiator, Trump recognized it’s better to fulfill his promise, move the embassy to Jerusalem, and stir up the situation to see if the stalemate can be broken. As a result, it does appear more options are on the table.

John Bolton, the president’s national security adviser, has stated that a one-state solution is a possibility that should be considered. Up until now, conventional wisdom dictated a two-state peace solution.

The celebrations and drama aside, the real importance of the move to Jerusalem is its impact on negotiations with the Palestinian leadership. An actual peace deal would stop the massive flow of money and international support to the Palestinians and reduce them to leadership of a small country, where they would be expected to run the gauntlet of elections and actually provide results to an expectant civilian population.

No one up until now figured out a way past the conundrum of making a peace deal look better than the status quo to the Palestinians.

Trump may have figured out a way forward, and supporting Jerusalem as the capital of Israel and the concept of a one-state solution might be just enough to make something happen. That’s way better than doing nothing.