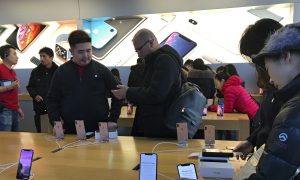 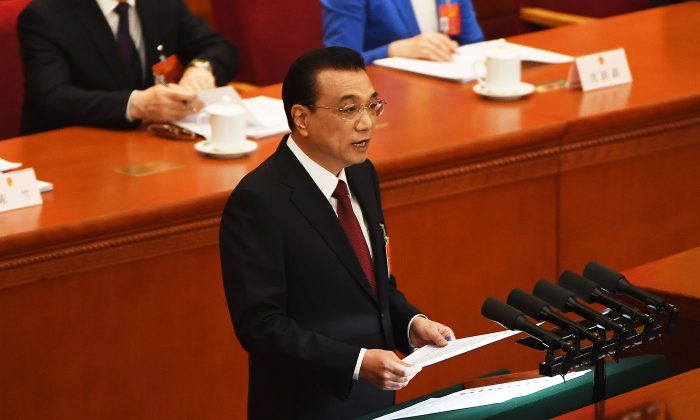 Tackling economic problems was the focus of Chinese Premier Li Keqiang’s work report given before the Chinese Communist Party’s rubber-stamp legislature during an annual meeting on March 5.

Over the course of the next two weeks, about 3,000 delegates in the National People’s Congress (NPC) will “vote” on legislation already pre-approved by Party leadership—as part of the annual “two sessions” meetings of the NPC and its political advisory body, the Chinese People’s Political Consultative Conference (CPPCC).

As China’s economic downturn deepens, the Party leadership has signaled through public speeches that getting the economy back on track is its top priority.

At the NPC meeting on March 5, the Chinese premier told the delegates that “the environment facing China’s development this year is more complicated and more severe.”

“There will be more risks and challenges that are either predictable or unpredictable, and we must be fully prepared for a tough battle,” he said.

Li announced a series of stimulus measures meant to keep the economy on a safe footing, including planned cuts of almost 2 trillion yuan ($298.3 billion) in taxes and fees for companies.

Those tax cuts are more aggressive than the 1.3 trillion yuan proposed in 2018, and include reductions aimed to support the manufacturing, transport, and construction sectors.

The Chinese regime has also set a target for economic growth of 6.0 percent to 6.5 percent, less than the 6.6 percent growth rate posted in 2018—which was the lowest level recorded in 28 years.

Experts attribute the slowing pace partly to the effects of the U.S.–China trade war, which saw $250 billion worth of Chinese imports slapped with U.S. tariffs, more stringent scrutiny of Chinese investments in the United States, and foreign companies moving production out of China to avoid the effects of the tariffs.

Concessions to the U.S.

As Washington and Beijing continue to negotiate a trade deal, the Chinese regime also demonstrated that it would make concessions to U.S. demands, at least on paper.

During Li’s work report, for example, he made no mention of the Made in China 2025 (MIC 2025) plan that has been touted as the country’s economic development blueprint for the next decade.

The industrial plan aimed to transform China into high-tech manufacturing powerhouse by 2025. It was heavily promoted by the Chinese regime until the U.S. administration’s criticisms of unfair practices sanctioned by the policy prompted central authorities to tone down mentions of the plan in state media last year.

Compared to the 2018 NPC meeting, when Li discussed how the Party could implement the plan, the conspicuous absence is in line with the Party’s strategy since last year to keep mum about China’s ambitions.

In December 2018, citing Chinese officials, the Wall Street Journal reported that Beijing was preparing a new plan to replace MIC 2025 that would “play down China’s bid to dominate manufacturing and be more open to participation by foreign companies,” according to the report.

The Trump administration has repeatedly denounced MIC 2025 for undermining competition with its state subsidies for domestic industries, as well as policies that pressure foreign companies to transfer technology to their Chinese joint-venture partners in exchange for market access.

Li hinted that the Chinese regime would take action on that front in his work report, when he spoke of the importance of “protecting intellectual property rights” and the need to punish infringers according to Chinese law.

The NPC is also set to rubber-stamp a foreign investment law proposed in December, which would prohibit local authorities from “using administrative means” to force foreign companies to transfer their technology. This issue has been one of the U.S. administration’s sticking points in trade talks.

However, China observers have expressed doubts that such a law could be effective in stopping IP theft.

In December, the NPC also proposed a patent law in which infringers would be subject to heavier penalties.

That proposal is also expected to be approved, as demonstrated by comments made by Zhang Yesui, head of the NPC’s foreign affairs committee—who told media March 4 that patent laws were expected to be amended.

Meanwhile, during a side meeting of the CPPCC on March 4, a Party official raised concerns about the private sector’s anxieties.

Sun Qian, the deputy procurator-general of China’s highest prosecutor’s office, brought up the issue of local governments arresting private company executives or suspending their companies’ operations upon suspicion of illegal activity—which has spooked the private sector, according to a report by Chinese finance magazine Caixin.

Sun’s comments mesh with public official comments and online articles released in 2018 that hinted at the Chinese regime’s desire to increase state interference in the private sector.

“We have unswervingly developed a public ownership economy, and unswervingly encouraged, supported, guided, and protected the development of privately run enterprises,” Xi said in a speech at the time.

Reuters and Olivia Li contributed to this report.