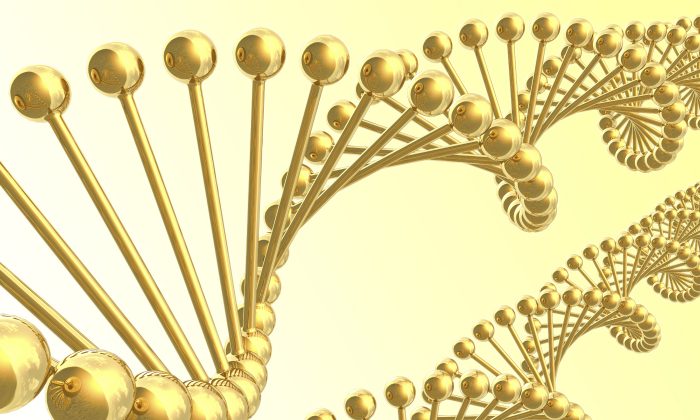 Gold nanoparticles have unusual optical, electronic, and chemical properties. But the tiny particles are much more interesting when they are closer to each other—either in small clusters or as crystals made up of millions of them.

Yet particles that are just millionths of an inch in size are too small to be manipulated by conventional lab tools, so a major challenge has been finding ways to assemble these bits of gold while controlling the three-dimensional shape of their arrangement.

One approach that researchers have developed has been to use tiny structures made from synthetic strands of DNA to help organize nanoparticles. Since DNA strands are programmed to pair with other strands in certain patterns, scientists have attached individual strands of DNA to gold particle surfaces to create a variety of assemblies.

But these hybrid gold-DNA nanostructures are intricate and expensive to generate, limiting their potential for use in practical materials. The process is similar, in a sense, to producing books by hand.

Enter the nanoparticle equivalent of the printing press.

It’s efficient, re-usable, and carries more information than previously possible. In results reported in Nature Chemistry, researchers from McGill University outline a procedure for making a DNA structure with a specific pattern of strands coming out of it; at the end of each strand is a chemical “sticky patch.”

“These encoded gold nanoparticles are unprecedented in their information content,” says senior author Hanadi Sleiman. “The DNA nanostructures, for their part, can be re-used, much like stamps in an old printing press.”

Some of the properties of gold nanoparticles have been recognized for centuries. Medieval artisans added gold chloride to molten glass to create the ruby-red color in stained-glass windows—the result, as chemists figured out much later, of the light-scattering properties of tiny gold particles.

Sleiman and colleagues hope their new production technique will help pave the way for use of DNA-encoded nanoparticles in a range of cutting-edge technologies.

Thomas Edwardson, first author of the paper says the next step for the lab will be to investigate the properties of structures made from these new building blocks.

“In much the same way that atoms combine to form complex molecules, patterned DNA gold particles can connect to neighboring particles to form well-defined nanoparticle assemblies.”

These could be put to use in areas including optoelectronic nanodevices and biomedical sciences, the researchers say. The patterns of DNA strands could, for example, be engineered to target specific proteins on cancer cells, and thus serve to detect cancer or to selectively destroy cancer cells.

The Natural Sciences and Engineering Research Council of Canada, the Canada Foundation for Innovation, the Centre for Self-Assembled Chemical Structures, the Canada Research Chairs Program, and the Canadian Institutes of Health Research funded the study.