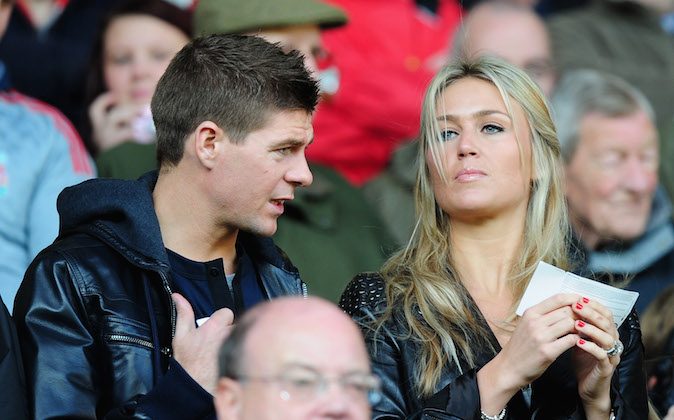 Steven Gerrard and his wife Alex Curran take their seats prior to the Barclays Premier League match between Liverpool and Manchester United at Anfield on October 25, 2009 in Liverpool, England. (Clive Mason/Getty Images)
Soccer

England captain Steven Gerrard wants to focus on the World Cup, and won’t be bringing his family with him.

“I’ve learned over the years it’s better to go to tournaments without them,” Stevie G told the Mirror.

Not taking wife Alex Curran, and his three daughters, Lilly-Ella, Lexie, and Lourdes to Brazil would be a tough, but necessary sacrifice for the Three Lions’ captain.

“The hardest part is being away from the family but what I’ve learned over the years is that it’s better to go to these tournaments without them,” said Gerrard.

“Some players are different and prefer to have their family there but I see it as a bit of a distraction.”

“No disrespect to Alex and the kids but after a long training session or a tough game I don’t want to be getting dragged pillar to post ­having to entertain three kids.”

“I want to get my rest, my recovery and get ready for the next game. And I feel my own form has been better when I have been out there on my own.”

“You’ve only got to sacrifice six to eight weeks of your life and you’ve always got FaceTime and Skype to stay in touch with the family,” Gerrard concluded.

Here’s an Associated Press article on Gerrard and four other English players to watch this World Cup.

5 England Players to Watch at the World Cup

LONDON (AP) — Going into the 2012 European Championship with England, Roy Hodgson had only a few weeks from being appointed to taking a squad to the tournament.

The two years since then have allowed Hodgson to implement his own plans, but he will head into the World Cup still relying on a core group of veterans alongside some tournament newcomers.

Wayne Rooney, the one truly world class striker in the England squad, has yet to deliver at a World Cup, failing to score in 2006 and 2010.

But with 38 goals in 89 international matches, Rooney is only 11 from matching Bobby Charlton’s England record.

A relief for England coach Roy Hodgson is that the Manchester United striker has settled his club future going into the World Cup by signing a new contract. A concern for Hodgson is just how Rooney might be affected by United’s lackluster season by the time he gets to Brazil.

“He has got a difficult job on his hands because they’ve had a disappointing season,” Hodgson said.

As the team’s leader, Steven Gerrard is an automatic starter, and rightly so.

“Magisterial” is how England coach Roy Hodgson views a player who remains as influential at 33 but realistically facing one final shot at the World Cup.

Hodgson will be hoping Gerrard is not affected by Liverpool falling just short in the Premier League title race after a costly mistake by the midfielder in the run-in against Chelsea.

Thriving in a deeper role with rejuvenated Liverpool, Gerrard will come up against the master in that position in the World Cup opener: Italy midfielder Andrea Pirlo.

Gerrard will match David Beckham’s record of 115 appearances for an England outfield player by playing in the three warm-up matches and three group stage games.

The 2010 World Cup will be remembered in England for goalkeeper Robert Green allowing Clint Dempsey’s long-range strike to slip through his hands.

In 26-year-old Joe Hart, England coach Roy Hodgson has a more reliable stopper between the posts, despite mishaps seeing him dropped by Manchester City for a time this season.

The blunders were uncharacteristic for one of England’s most reliable performers at Euro 2012, but Hart went on to help City win the Premier League.

“He made a couple of mistakes in (City) games, his coach decided to leave him out, but luckily he’s come back and played well,” Hodgson said.

Taking Jack Wilshere to Brazil could be a risk. Since breaking his left foot during England’s 1-0 win over Denmark in March, Wilshere has only managed two substitutes’ appearances for Arsenal, amounting to around an hour of competitive football in May.

But Hodgson is gambling on the 22-year-old Wilshere’s fitness in the hope the energetic midfielder can provide the dynamism and creativity missing at Euro 2012 when the midfielder was out through injury.

England coach Roy Hodgson sprang a surprise by calling up Adam Lallana for the November friendlies against Chile and Germany, and the versatile attacking midfielder retained his place in the squad for the draw with Denmark in March.

Not only should the 25-year-old Lallana make the World Cup squad but, if he maintains his lively goal-scoring form for Southampton, is a strong contender to start for England and provide an element of unpredictability the team desperately needs in Brazil.