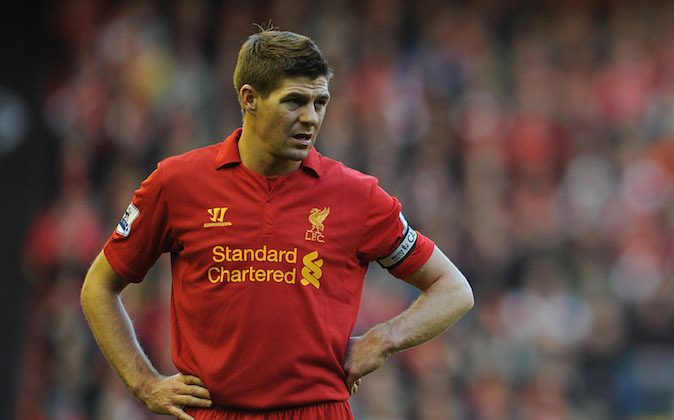 Steven Gerrard of Liverpool looks on during the Barclays Premier League match between Liverpool and Wigan Athletic at Anfield on November 17, 2012 in Liverpool, England. (Chris Brunskill/Getty Images)
Sports

Steven Gerrard Net Worth, Earnings 2014: How Much Does England, Liverpool Captain Make?

English footballer Steven Gerrard is one of the better known soccer players in the world today.

The England and Liverpool captain is perhaps best known for his inspirational display in the 2005 Champions League final, where he scored the Reds’ crucial come-back goal (Liverpool were losing 0-3 at half-time) and played three different positions (second striker, central midfielder, and right-back) en-route to a European title.

Gerrard, also known as “Stevie G,” is a one-club man, a rarity in the age of big-money moves. He made his senior debut with Liverpool in 1998, and has been with Liverpool for 16 years.

Gerrard has scored 173 goals in 669 appearances for Liverpool, an excellent tally for a midfielder.

According to CelebrityNetworth.com, Gerrard’s net worth is $60 million.

Forbes puts his earnings at $18.7 million, which makes him the 86th wealthiest athlete in the world. Steve G’s salary and winnings amount to $13.2 million, and his endorsements to $5.5 million.

Here is an Associated Press article on Steven Gerrard.

While Upbeat, Gerrard Warns About Pain of Failure

SAO PAULO (AP) — At England’s beachside hotel in Rio de Janeiro it was captain Steven Gerrard who tried to raise the spirits of his demoralized teammates. They hadn’t been outplayed by Italy in their World Cup opener — far from it — but still go into Thursday’s game with Uruguay on zero points in Group D.

Addressing the squad, Gerrard told them to be “really proud of the effort and commitment,” but the 112-cap veteran also delivered a warning: lose against Uruguay and they are bound to be back on the plane to England next week.

“Realize it could be a terrible long, frustrating summer if we don’t get it right on Thursday,” Gerrard recalled telling the team on Sunday night.

“There is no hiding place for a player when you go out of a tournament. You go home earlier than you expect. It can be tough as a player and it can take an awful long time to get over it.”

Gerrard knows that only too well, having never progressed further than the quarterfinals at two World Cups and two European Championships with England.

“It wasn’t a message to scare any of the lads but a wake-up call to everyone in the room, staff, players,” Gerrard said. “That is the reality of where we are and we need everyone focused and right on it to perform individually and collectively on Thursday.”

There is confidence in the England camp, with the players taking heart from the glowing praise back home following the spirited attacking endeavor displayed by the newcomers in the 2-1 loss to Italy.

“Two years ago against the same opposition in Italy we got criticized for being on the edge of our own box, showing no bravery or ambition going forward,” Gerrard said. “Anyone who watched Saturday’s game can’t point a finger at England for lacking commitment, desire, guts and bravery going forward.

“For me the key in this game is how we defend because Uruguay’s strengths are in their front players: (Edinson) Cavani, (Luis) Suarez, (Diego) Forlan, (Gaston) Ramires,” the 34-year-old midfielder said. “They are the key players who can hurt this England team.”

But England looked susceptible at the back against Italy, with Leighton Baines exposed on the left flank in the build up to Mario Balotelli’s winner.

“It is no good us being really good going forward on the break if we can’t defend properly,” Gerrard said.

Like England, Uruguay has no points after opening with a surprise 3-1 loss to Costa Rica. Gerrard has inside knowledge of the threat pose by Uruguay striker Luis Suarez, a teammate at Liverpool who scored 31 times in the Premier League last season but is now recovering from surgery on his left knee.

“(From) having a bit of banter with Luis I get the impression he is going to play and he is looking forward to it,” Gerrard said. “I know him better than most that he will be desperate to play well and score.”

Just as desperate as Gerrard is not to leave Brazil after the group stage, knowing it could be his last tournament with England.

“When you get to this age you want to try and appreciate and savor every moment and try and achieve everything that is in your grasp,” he said. “It is my last World Cup that’s for sure, 100 percent, and time is running out as an England player.”