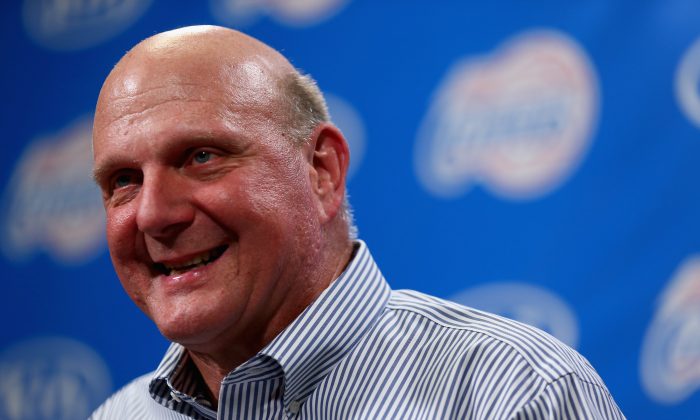 Steve Ballmer Retires From Microsoft Board; Cites LA Clippers Ownership as a Reason

Steve Ballmer has announced that he is stepping down as a Microsoft board member.

In a letter to current CEO Satya Nadella, Ballmer, 58, cited “a combination of the [LA] Clippers, civic contribution, teaching and study taking a lot of time” as the reason for him standing down.

“Given my confidence and the multitude of new commitments I am taking on now, I think it would be impractical for me to continue to serve on the board, and it is best for me to move off,” Ballmer wrote.

“The fall will be hectic between teaching a new class and the start of the NBA season so my departure from the board is effective immediately.”

Still Ballmer told Nadella to count on him to “keep ideas and inputs flowing,” and that he would “support and encourage boldness by management in my role as a shareholder in any way I can.”

Ballmer was previously the CEO of Microsoft from 2000 to 2013. He succeeded Microsoft founder and first CEO Bill Gates.

Ballmer announced on August 23, 2013 that he would be stepping down as CEO, and handled the world’s largest software company over to Satya Nadella.

In response to Ballmer’s letter, Nadella noted that his “insights and leadership will be greatly missed as part of the board.”

Nadella added: “As you embark on your new journey, I am sure that you will bring the same boldness, passion and impact to your new endeavors that you brought to Microsoft, and we wish you incredible success.”

LOS ANGELES (AP) — Sweating, clapping and shouting until he was nearly hoarse, Steve Ballmer introduced himself to Los Angeles Clippers fans at a rally on Monday celebrating his new ownership of the NBA team.

The former Microsoft CEO made his way through the crowd inside Staples Center to Eminem’s “Lose Yourself,” exchanging high-fives and chest-bumping as he took the stage in front of 4,500 fans.

Ballmer paid a record $2 billion for the team in a sale that was confirmed by a judge last week. The name of disgraced former owner Donald Sterling, who controlled the team for 33 years before being banned for life by the NBA for racist remarks, was never uttered during the rally.

Ballmer’s fervor was in stark contrast to Sterling, who never spoke to the media and was famously frugal when it came to spending on the team during decades of losing — despite having amassed a fortune through real estate.

“Today is about this other guy who just happened to have two billion dollars in his pocket,” coach Doc Rivers joked on stage. “I asked him are you sure it went through and he said, ‘I know my bank account is minus two billion so I know something went through.'”

Ballmer gave out his email address during the televised rally and was quick to assure fans he won’t move the team to Seattle, where he’s lived for 34 years. He was nearly an NBA owner last year before league owners chose to keep the Kings in Sacramento, rather than allow them to be sold to a group that included Ballmer and moved to Seattle.

“I love Los Angeles,” he said. “Yes, I live in Seattle. We’re not moving the Clippers to Seattle for a hundred reasons.”

Ballmer used a microphone, but his booming voice easily filled the arena without it. He prowled the stage and gestured to make his points in the enthusiastic style he was known for among Microsoft employees.

Chris Paul, Blake Griffin and DeAndre Jordan were among eight players on hand, along with Rivers, who guided the Clippers to 57 wins last season, his first with the team.

“When he came through the crowd, I literally had goose bumps,” Griffin said afterward. “I don’t know if there’s one good word to describe him. I know all our guys are excited about the energy he brings. It’s completely different.”

Ballmer took a few emailed questions from season ticketholders, including a 26-year fan who asked how the next 26 years of the franchise would be different.

“I’ll boldly say the Clippers will win many, many more Larrys in the next 26 years than they did in the last 26,” he said, referring to the Larry O’Brien trophy that goes to the NBA champion.

Rivers clearly got a kick out of Ballmer’s passionate display, cracking up at his new boss’ proclamations after having previously seen him only on YouTube.

“I love energy,” Rivers said later. “You get caught up in that and that’s good. That was great for our fans.”

Interim CEO Dick Parsons testified during the court battle over the team’s sale that Rivers would quit if Sterling was the owner going into next season.

“Sometimes you do have to take a stand,” Rivers said. “I didn’t think I was going to have to (quit), but a lot of us were willing to for sure.”

He added, “You always have to move on. I have.”

Ballmer gave the title “owner emeritus” to Sterling’s estranged wife, Shelly, who negotiated the deal. She will receive two floor seats, 10 other seats and parking at Staples Center for games.

“Without her this deal does not get done,” Rivers said afterward. “She wants to be a fan. She’s no longer the owner. I’m fine with that.”

Ballmer shared dinner with Rivers and some of the players a night earlier, when the discussion focused on where he’ll sit during games. Sterling sat at mid-court within earshot of the players.

When someone suggested behind the Clippers’ bench, like Dallas owner Mark Cuban does, Rivers said, “I don’t know if I could deal with that energy.”