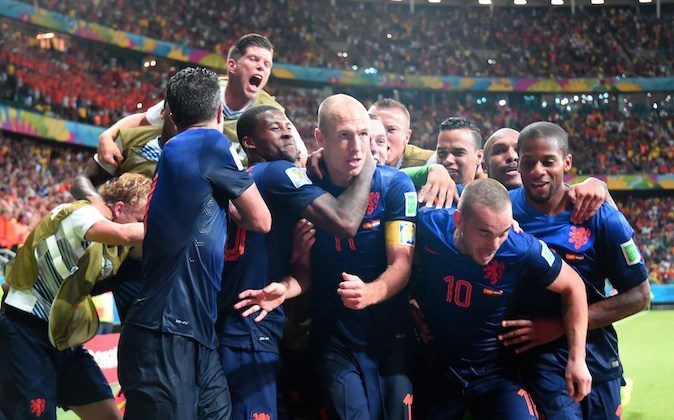 Netherlands' forward Arjen Robben (C) and his team-mates celebrate after Robben scored their fifth goal during a Group B football match between Spain and the Netherlands at the Fonte Nova Arena in Salvador during the 2014 FIFA World Cup on June 13, 2014. (DAMIEN MEYER/AFP/Getty Images)
Soccer

UPDATE: Arjen Robben scores his second goal in the Netherlands’ 5-1 rout of Spain.

Dutch youngster Stephen de Vrij has scored a header to put the Netherlands 3-1 ahead.

In the first half, Robin van Persie scored a brilliant diving header to put Holland level after a Xabi Alonso penalty put Spain ahead.

Arjen Robben added another goal in the second half via a left-footed shot after a nice bit of skill.

Spain vs Netherlands, the Rematch

SALVADOR, Brazil (AP) — Spain goalkeeper Iker Casillas crawled and scrambled in vain, Gerard Pique was beaten for pace and Sergio Ramos made a series of blunders.

A backline that helped Spain win its last three major tournaments was totally ripped to shreds in a 5-1 defeat by the Netherlands at the World Cup on Friday, as the defending champions tumbled to their heaviest competitive defeat since 1950.

A howler by Casillas gifted Robin van Persie his second goal and the Real Madrid keeper was later on all fours as he tried to catch up with Arjen Robben as the Dutch winger waltzed through the Spain area before scoring his second of the night.

Pique was easily rounded by Robben for his first goal and then outsprinted by the Dutchman for his second, despite having a clear head start on the 30-year-old midfielder.

Ramos, normally the beating heart of Spain’s backline, could do nothing as his defense collapsed around him.

In one game, Spain conceded more goals than it did in its last two major tournaments combined.

Spain only conceded one goal as it retained its European championship title in 2012 and just two as it lifted the World Cup for the first time in 2010.

The European champion, which hadn’t been beaten so humiliatingly since losing 6-1 to Brazil the last time the World Cup was played in this South American country, has little time to regroup in a tough Group B.

With Chile next on Wednesday, Del Bosque needs his team to rediscover its former defensive strengths.