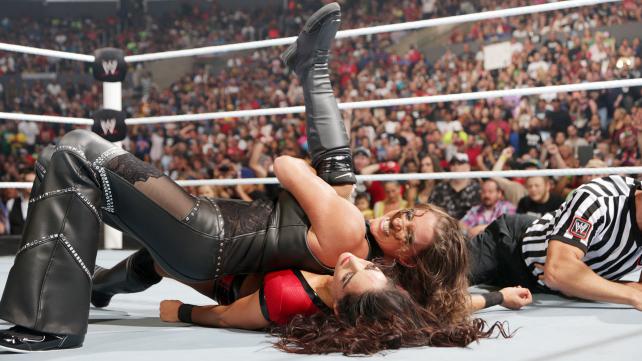 Stephanie McMahon won her first match in more than 10 years at SummerSlam, defeating Brie Bella with the help of Brie’s sister Nikki.

The storyline was almost a month in the making, when McMahon slapped Brie on Raw on July 21 when Brie was visiting to support her sister. McMahon was arrested.

McMahon, who is worth an estimated $25 million, and Triple H asked Brie to drop the charges but Brie demanded to be rehired and get a match at SummerSlam.

Bleacher Report says that while Brie lost, it’s far from the end of the feud.

“During the go-home edition of Raw, McMahon introduced Daniel Bryan’s physical therapist Megan Miller to the storyline,” it reported.

“Miller claims that she had an affair with Bryan, but this is clearly a ploy from The Authority to distract Brie and create some drama between the couple. Brie slapped Miller in the ring after the accusations and was arrested later that night before her scheduled match with McMahon.

“It was a clever move by McMahon to get revenge for the same embarrassment and likely sets the stage for another match between these two women at Night of Champions in September.”

If McMahon does keep wrestling, it’s unclear if there are any viable opponents other than Brie. Her sister Nikki could turn on McMahon–the reasons for the betrayal at SummerSlam seem unclear–setting up a possible match. Paige or AJ Lee seem to be the only other possible candidates for someone of McMahon’s stature, but they’re embroiled in their own ongoing feud.

Night of the Champions is scheduled for September 21 at Bridgestone Arena in Nashville, TN.