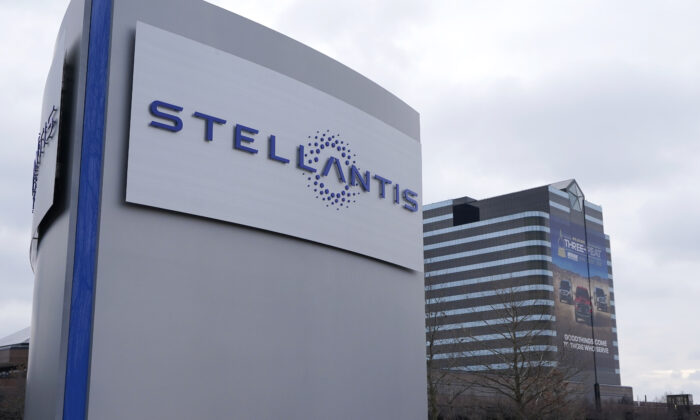 The Stellantis sign outside is shown at the Chrysler Technology Center in Auburn Hills, Mich., on Jan. 19, 2021. (Carlos Osorio/AP Photo)
Companies

Auto giant Stellantis and Foxconn, the world’s largest electronics manufacturer, announced on Dec. 7 that they will partner to develop and supply a new line of automotive semiconductor chips for the auto industry.

Supplies of critical semiconductor chips had been a problem for the auto industry, which led automakers to temporarily close factories.

It is hoped that the partnership will help drive stability in Stellantis’s global semiconductor supply chain and will secure future supplies of computer chips to guard against another global chip shortage.

The first semiconductor chips from the joint partnership are expected to be installed in Stellantis’s 14 brands, which include Dodge and Jeep, by 2024.

The two partners said that the new in-house chips will be made available to third-party customers in the auto industry.

“Our software-defined transformation will be powered by great partners across industries and expertise,” said Carlos Tavares, CEO of Stellantis.

“With Foxconn, we aim to create four new families of chips that will cover over 80 percent of our semiconductor needs, helping to significantly modernize our components, reduce complexity, and simplify the supply chain. This will also boost our ability to innovate faster and build products and services at a rapid pace.”

“As a leading global technology company, Foxconn has the depth of experience in manufacturing semiconductors and software—two key components in the production of electric vehicles,” said Young Liu, chairman and CEO of Foxconn Technology Group.

“We look forward to sharing this expertise with Stellantis and together tackle the long-term supply chain shortages, as we continue with the expansion into the electric vehicle market.”

This is the second partnership between the two companies after the May announcement of their Mobile Drive project aimed at developing smart cockpit auto technology.

The collaboration is one of several recent moves by Foxconn in the automotive sector, as the semiconductors will be used by Foxconn for its own new electric vehicle line.

Meanwhile, Stellantis plans to triple the production of cars that can generate revenue from the software from 12 million to 34 million by the end of the decade.

To meet targets, Stellantis will expand its software engineering team of 1,000 to 4,500, while more than 1,000 of the expanded team will be retrained in-house.

General Motors also announced its own partnerships with semiconductor manufacturers, including Qualcomm Inc. and NXP Semiconductors NV, to co-develop and manufacture computer chips for its vehicles.