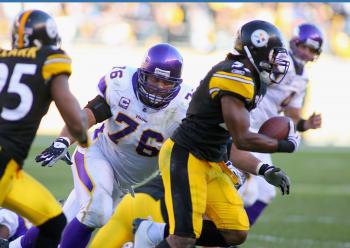 NO HOPE OF CATCHING HIM: Minnesota's Steve Hutchinson #76 can't catch Pittsburgh's Keyaron Fox, who picked off Favre and returned it for a TD. (Rick Steward/Getty Images)
NFL

By Rahul Vaidyanath
Print
Pittsburgh’s defense came up with two fourth-quarter touchdowns to erase Minnesota’s name off the NFL’s list of unbeaten teams, winning 27–17 at Heinz Field on Sunday.

In a wild fourth quarter, Brett Favre and the Vikings were in Pittsburgh’s red zone on two separate occasions and on both occasions Pittsburgh returned a turnover for a touchdown. Favre threw for 334 yards and completed two thirds of his passes but when it counted, he couldn’t deliver the magic of weeks past.

The first quarter began with the two heavyweight teams feeling each other out. As could be expected, it was a tight defensive battle with the Steelers having a slight edge in field position due to some poor punting by Minnesota’s Chris Kluwe.

The Vikings finally came to life midway through the second quarter as they tried to stretch the compact Steelers defense horizontally. Using the perimeter of the field, Favre started connecting with his receivers. He drove the Vikes 76 yards in 13 plays, culminating with a two-yard TD run for Adrian Peterson.

But Ben Roethlisberger is a master at the two-minute drill. And in 1:15, he drove the Steelers 91 yards in eight plays thanks in large part to Mike Wallace’s two catches for 62 yards. Wallace capped the drive with a 40-yard catch and run TD as Minnesota failed to put any pressure on Roethlisberger.

After the teams traded field goals in the third quarter, the Steelers led 13–10.

The final quarter began with a 45-yard catch and run play from Roethlisberger to Super Bowl hero Santonio Holmes. With the Steelers threatening to put another seven on the board, running back Rashard Mendenhall fumbled on the Vikings 5-yard line and the visitors got the ball back.

Then Favre took charge again, and with a successful challenge of play where Vikings receiver Sidney Rice was judged to have caught the ball out of bounds, the Vikings were knocking on the Steelers’ door once again.

On the Steelers’ 8-yard line, Favre dropped back to pass and had the ball knocked out of his hands and into those of LaMarr Woodley. The linebacker returned the ball, accompanied by a convoy of blockers, 77 yards for the TD.

“I’m like a defensive lineman,” said Woodley when asked about comparing his TD to James Harrison’s in the Super Bowl. “I was real tired. It was late in the game. I was exhausted.”

But the dejection wouldn’t last long for the Vikings. On the ensuing kickoff, the rookie out of Florida, Percy Harvin, returned the kickoff 88 yards for the TD. Pittsburgh kicker Jeff Reed had a chance to stop Harvin, but seemed more intent on preserving his own health. It was Harvin’s second kickoff return TD of the season.

With the Steelers up 20–17, the Vikings got the ball back with 3:21 and two time-outs remaining—not an unfamiliar position for Favre.

Favre went back to work with his most lethal weapon, Adrian Peterson. On a check-down pass, Peterson absolutely ran over Steelers corner back William Gay and turned a small gain into a 29-yard gain.

“This man is a beast!” exclaimed Fox commentator Tony Siragusa.

Favre then did something he hasn’t done all year long. Leading the league in QB rating with nine TDs and zero INT’s in the red zone, Favre threw a pass slightly high to Chester Taylor, which was picked off. Taylor couldn’t squeeze the ball and it fell into the hands of Steelers linebacker Keyaron Fox.

Fox rumbled 82-yards for the TD, and that was the ball game.

“They [Steelers defensive touchdowns] were kind of fluke deals. We’ve been good with our turnovers. Hats off to those guys,” said Vikings coach Brad Childress.

Favre and the Vikings suffered their first loss of the season. And next week they head to Green Bay, where Favre will surely have a lot going through his mind.

“My career with Green Bay speaks for itself, and the games that I played in Lambeau Field—it’s a special place,” said Favre in the post-game press conference. “It’ll make a for a good story this week, ‘Favre going back.’”

The Pittsburgh Steelers, as defending Super Bowl champions, surprisingly have been flying under the radar so far this season. With a poor 1–2 start to the season, other teams like the Indianapolis Colts, Baltimore Ravens, and Denver Broncos have been grabbing the headlines in the AFC. But with the win, the Steelers move to 5–2 and have to be thought of again as one of the teams to beat in the AFC.