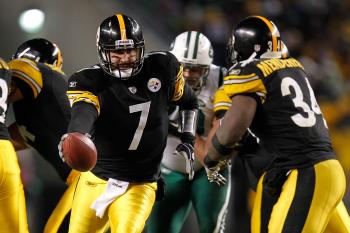 Rahul Vaidyanath
Journalist
Rahul Vaidyanath is a journalist with The Epoch Times in Canada. His areas of expertise include the economy, financial markets, China, and national defence and security. He has worked for the Bank of Canada, Canada Mortgage and Housing Corp., and investment banks in Toronto, New York, and Los Angeles.
View profile
Follow
biggersmaller
Print
The Pittsburgh Steelers will compete in their eighth Super Bowl after taking a 24–0 lead and hanging on to beat the New York Jets 24–19 on Sunday in freezing Pittsburgh.

They will face NFC champion Green Bay in Arlington, Texas, after the Packers knocked off the Chicago Bears 21–14 earlier on Sunday.

The Steelers were untouchable in the first half with their running game gashing the vaunted Jets defense. It all began with the Steelers’ opening drive. That drive lasted 9:02 and resulted in a Rashard Mendenhall touchdown.

Mendenhall reeled off 121 yards on 27 carries for the six-time Super Bowl champions. Ninety-five of those yards came in the first half alone.

“We knew we’d have a chance to run the ball well,” Mendenhall told CBS after the game.

The Jets struggled in the first half to stop the Steelers’ running game. When all was said and done, they gave up 166 yards on the ground. During the regular season, they averaged giving up 91 yards per game.

The Jets struggled on offense, and defensively, they looked tired, missing several tackles.

Pittsburgh came up with two touchdowns late in the second quarter to put some distance between themselves and the Jets. Roethlisberger ran in a 2-yard touchdown and William Gay returned a Mark Sanchez fumble 19 yards for the score.

After the first half the Steelers had the ball for 21:04 in comparison to 8:56 for the Jets. The Jets were actually limited to only 50 yards on offense. Wideouts Braylon Edwards and Santonio Holmes didn’t have any catches.

The Jets got the third quarter off to a great start as Sanchez rolled to his right and found former Steeler Santonio Holmes for a big 45-yard touchdown. They needed to make big plays and chip away at the seemingly insurmountable deficit and this was a great beginning.

But the Steelers recovered from that blow and the Jets lack of discipline prevented their own momentum from growing. A critical roughing the kicker penalty gave the Steelers a first down when the Jets defense would’ve handed them a three-and-out.

By the fourth quarter, the temperature had dropped to 8 degrees and with wind chill, it felt like -4. But the Jets were driving and Sanchez was starting to connect with his wideouts better than when it was slightly warmer.

The Steelers defense came up with the answers when questions were asked of them. They stopped the Jets on fourth-and-goal from the 1-yard line when a Jets touchdown would’ve made it 24–17. LaDainian Tomlinson tried to run it down the heart of the stiff Steelers defense but there were too many big bodies in his way.

That was a heartbreaker for the Jets who ran 17 plays over eight minutes and came away with nothing. But their hope was renewed when a bad snap forced Ben Roethlisberger to get tackled in the end zone for a safety.

The Jets took the next possession in for a touchdown as Sanchez found Jericho Cotchery for a 4-yard score.

After that, the Jets needed to get a three-and-out from the Steelers. But, uncharacteristically, the Steelers didn’t simply run the ball and play in to the Jets’ hands.

Using his mobility—something the Jets defense did not face in Peyton Manning or Tom Brady—Roethlisberger was able to extend the play when leaving the pocket to find his receivers.

The Steelers made two big first downs and were able to run out the clock.

“I’m proud of our football team. We finished short again,” Ryan said. “We played a good half and that was it. Our team is resilient. We don’t need to apologize to anybody. We plan on being back.”

The Super Bowl will be played on Sunday, Feb. 6.