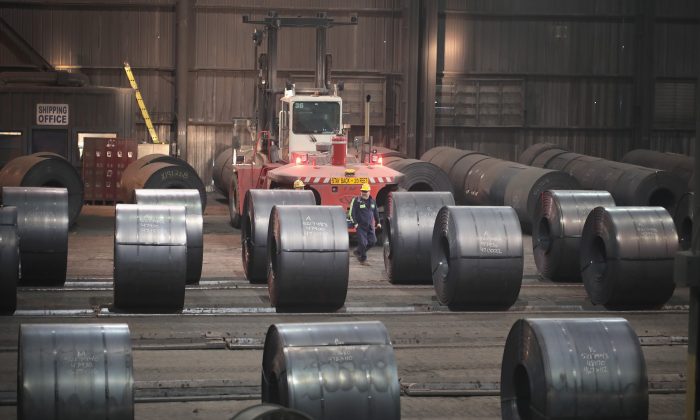 “We anticipate the project will create approximately 600 well-paying positions, and abundant opportunities for indirect job growth from customers and other support service providers, bringing meaningful economic growth to the surrounding communities,” the company said in a statement.

Steel Dynamics Inc. says the electric arc-furnace unit will be in Sinton, about 25 miles northwest of Corpus Christi.

“We are extremely excited to announce our selection of Sinton as the site for our next-generation, new flat roll steel mill investment,” said Mark. D. Millett, President and Chief Executive Officer.

The company said in a statement on Monday, July 22, that the site is strategically located for the southwestern U.S. and Mexico markets.

Millett said Steel Dynamics has been developing a flat roll steel business strategy for those areas for several years.

Company officials say the mill will be able to produce up to 52½-ton (48 metric ton) coils for the energy, automotive, construction and appliance industries. The site has transport access to railroads, highways and the Port of Corpus Christi.

Construction should begin next year.

Steel Dynamics was founded in 1993 and has grown to become one of the largest domestic steel producers and metals recyclers in the United States, based on estimated annual steelmaking and metals recycling capability.

‘Steel Jobs Are Coming Back’

Nucor Corp. announced plans on Jan. 7 to build a $1.35 billion steel-plate mill in the United States that would create approximately 400 new jobs.

“Tax reform, continued improvements to our regulatory approach and strong trade enforcement are giving businesses like ours the confidence to make long-term capital investments here in the U.S. that create jobs and ensure our success for decades to come.”

The mill is expected to be fully operational by 2022 with an estimated output of 1.2 million tons of steel-plate products per year. The company expects to select a site for the new mill somewhere in the Midwest early this year.

Nucor already operates plate mills in North Carolina, Alabama, and Texas. The new mill will have the capacity to create products which can’t be made at the other facilities.

“By building this state-of-the-art plate mill in the Midwest—the largest plate-consuming area in the United States—we will enhance our ability to serve our customers in the region while also furthering our goal of meeting all the steel needs of our customers around the country,” said Leon Topalian, executive vice president of beam and plate products.

Trump’s tariffs had already resulted in the creation of more than 11,000 jobs by August 2018, according to a tally by Coalition for a Prosperous America, a nonpartisan trade group representing U.S. farmers, ranchers, manufacturers.

“The evidence is that the tariffs are working. Economic growth is up, inflation is under control, many of the tariffed industries are enjoying strong recoveries in output, profits, and employment,” Jeff Ferry, CPA’s research director, said in a statement Dec. 4.

“Steel JOBS are coming back to America, just like I predicted,” Trump wrote on Twitter on Nov. 28.