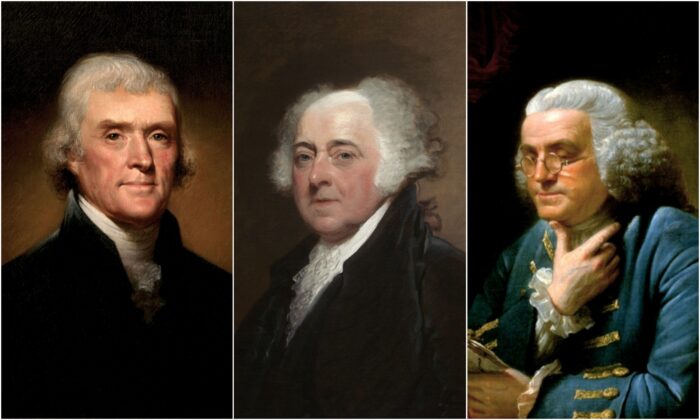 (L-R) Thomas Jefferson advised no less than two hours of exercise a day, regardless of weather. John Adams opined: “Old minds are like old horses; you must exercise them if you wish to keep them in working order.” Benjamin Franklin walked and lifted weights into his old age. (Public domain)
Life & Tradition

Those of us who are entering old age frequently read books or online articles about ways to enhance our mental agility, to keep our minds nimble and quick.

Some people follow special diets, believing that certain foods or supplemental vitamins can strengthen our powers of reason and thought. Others exercise at the gym or take long walks through their neighborhood as a means to keep the lights burning in the attic. Some experts tell us that playing cards or board games, or matching wits with Sudoku or crossword puzzles help feed our powers of cognition. A few of the elderly people I’ve known believe that communication—conversations with family and friends, reading, writing letters and emails—contributes to the care and preservation of the mind.

Other men and women find that work helps to keep them young. Clint Eastwood, age 91, just directed and starred in another Western, “Cry Macho,” and the 87-year-old woman who works at the laundromat in my town is still going strong. Helen Hooven Santmyer was 80 years old when she finished writing her 1,184-page best-selling novel “… And Ladies of the Club,” and Michelangelo was creating art at the age of 88.

And three of our Founding Fathers—Benjamin Franklin, John Adams, and Thomas Jefferson—all lived and worked to a ripe old age. Let’s see what advice and practices they might offer us on aging and brainpower.

Among his contemporaries, Thomas Jefferson (1743–1826) was well known for his advocacy of eating little meat and a great many vegetables. Two years before Jefferson’s death, Daniel Webster dined at his table and later wrote, “He enjoys his meal well, taking with his meat a large proportion of his vegetables.” Webster also noted, “He has a strong preference for the wines of the Continent, of which he has many sorts of excellent quality.”

Webster was correct about Jefferson’s love of wine. As president, for instance, he ordered 20,000 bottles of wine from Europe for his personal collection.

In “Benjamin Franklin—a Founding Foodie,” writer Tori Avey tells us that Franklin (1706–1790) also loved wine and took an intense interest in food and in weight control. He coined the phrase “An apple a day keeps the doctor away,” he sometimes practiced vegetarianism, and while in London, he was delighted to learn about soybeans and tofu. Though not as heavy a drinker as many of his contemporaries, Franklin once described wine as “a constant proof that God loves us, and loves to see us happy.”

John Adams (1735–1826) stuck to a traditional New England diet of humble foods, often boiled, and typically kicked off his day with a glass of hard cider, followed in the evening by several glasses of Madeira.

None of these men were eating processed foods, and all were careful to select healthy fare for their meals. Might those dietary restraints partially explain their mental acuity in their old age?

We sometimes forget that our ancestors lived in a time when exercise, even for men such as the Founding Fathers, was part of the daily routine: walking a mile or so to school or town, planting gardens and fields, riding horses, hunting and fishing.

After serving as president, John Adams returned to his farm in Massachusetts, where he directed workers in the barns and fields, and sometimes pitched in alongside them. Franklin—a swimmer in his youth—is the only Founding Father in the Swimming Hall of Fame and was an outspoken advocate for exercise his entire life. He walked and lifted weights into his old age, declaring “No gains without pains,” even when such exercise left him sore and fatigued.

Thomas Jefferson wrote, “Not less than two hours a day should be devoted to exercise, and the weather should be little regarded.” On another occasion, he noted that “leaving all the afternoon for exercise and recreation, which are as necessary as reading; I will rather say more necessary, because health is worth more than learning.”

These gentlemen all understood the interplay between physical and mental health and aging.

Most readers can recollect the greatest accomplishments of these three men. Adams was a leader in the American Revolution and our second president. Jefferson was the chief architect of the Declaration of Independence and followed Adams into the White House. Like Jefferson, Franklin was a Renaissance man: an inventor, a diplomat, and creator of public libraries and fire departments.

What we may not know is that these three men continued their work and achievements late into life. Thomas Jefferson founded the University of Virginia in 1819, when he was in his 70s. After serving as president, John Adams spent a good deal of time writing pamphlets, books, and letters, a correspondence that includes more than 100 letters to Jefferson, once they had renewed their broken friendship. Just a few years before his death, Benjamin Franklin served as president of the Supreme Executive Council of Pennsylvania, the equivalent of a governor, and even attended the Constitutional Convention that met in Philadelphia in 1787.

Moreover, all three men had a lifelong passion for books and reading. At the time of their death, both Adams and Franklin had collected more than 3,000 volumes in their personal libraries. They spoke often to others of what they were reading, subjects that ran from fiction to biographies and histories.

“I cannot live without books,” Jefferson wrote to Adams in 1815. That letter was in reference to the sale of his collection of 6,500 books to the U.S. government to replace the library in the Capitol building after the British had burned it. Jefferson continued to collect books and in his later years read such authors as Tacitus, Homer, and Shakespeare.

Surely reading and pondering such authors helped these men stay in shape.

John Adams once stated, “Old minds are like old horses; you must exercise them if you wish to keep them in working order.”

All three of these historical figures followed that wise counsel. Despite their advanced ages—they lived approximately 25 to 30 years longer than the average male of that time—diet, exercise, work, and reading kept them alert and mentally acute until their final days.

By their example, they teach older people like me that our minds stay young when they remain engaged.

And just in case any younger readers have made their way through my article, here’s a bit of humorous advice from Ben Franklin: “Many people die at twenty-five and aren’t buried until they’re seventy-five.”

Live rather than exist, Franklin is telling us. Engage the world. Acquire knowledge. Dream big and embrace each day. That’s the ticket to a full and useful life that leads to wisdom.

Even in old age, Adams, Franklin, and Jefferson did these very things.

And barring illness, so can the rest of us.