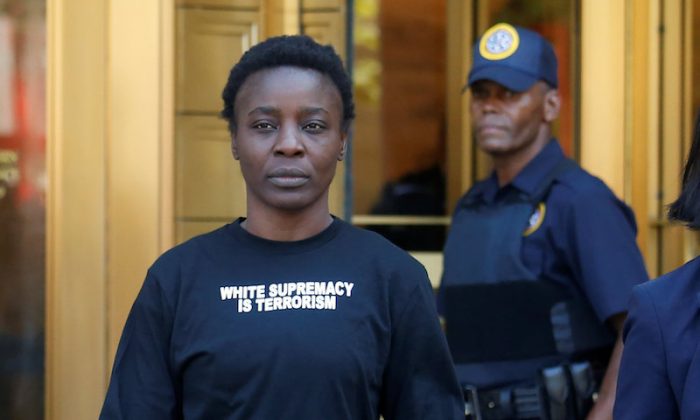 Patricia Okoumou walks out of federal court from her arraignment, a day after authorities say she scaled the stone pedestal of the Statue of Liberty, in Manhattan, New York, on July 5, 2018. (REUTERS/Shannon Stapleton)
US News

NEW YORK—A New York woman who scaled the stone pedestal of the Statue of Liberty to protest immigration policy pleaded not guilty to trespassing, disorderly conduct, and interfering with governmental administration in her first court appearance on Thursday.

Therese Patricia Okoumou, 44, was arrested on Wednesday after she climbed the statue’s pedestal and began a three-hour standoff with police that led to the evacuation of the landmark on the Fourth of July holiday, celebrating independence.

After her brief arraignment on the three misdemeanor charges, Magistrate Judge Ona Wang ordered Okoumou to be released from federal custody.

“While we must and do respect the rights of the people to peaceable protest, that right does not extend to breaking the law in ways that put others at risk,” Berman said in a statement.

An activist group called Rise and Resist said on Facebook that Okoumou was part of a protest at the base of the statue against U.S. immigration policy.

Television footage on Wednesday showed two officers, outfitted in harnesses and ropes, slowly approaching a woman and grabbing her as she clung to the sloping side of the more-than-300-foot-high statue, moments after she tried unsuccessfully to scale Lady Liberty’s robes.

Seven protesters were arrested on the island earlier in the day, the National Park Service said.

The incident forced authorities to evacuate Liberty Island on a sweltering holiday afternoon when thousands usually visit the statue, a symbol of American freedom that has stood in the New York Harbor since 1886.

The Statue of Liberty, a gift from the people of France to the people of the United States, has become a worldwide symbol of American values. Inscribed on its base is a sonnet by Emma Lazarus, which includes the famous lines: “Give me your tired, your poor, Your huddled masses yearning to breathe free.”

The next hearing in Okoumou’s case is set for Aug. 3.