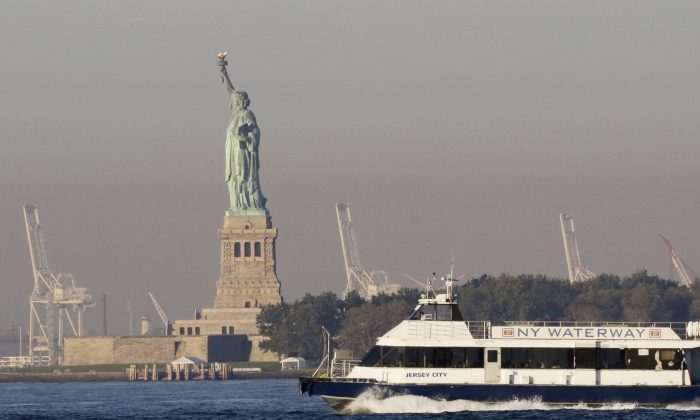 A commuter ferry passes the Statue of Liberty in New York City, Oct. 1, 2013. Statue of Liberty, like other national monuments, is closed due to the government shutdown. (Mark Lennihan/AP Photo)
New York

NEW YORK—After the federal government shutdown and closure of Liberty Island, the ferry operator for the Island, Statue Cruises, is restarting its boat tours of the national monument.

The tours were first introduced in the aftermath of Hurricane Sandy, which damaged both Liberty and Ellis islands. Liberty Island reopened on Independence Day this year, but Ellis Island remains closed.

More than 400 parks across the nation are closed as a result of an impasse in Congress, including Liberty Island, the home of Statue of Liberty.

The Harbor Tours offered by Statue Cruises feature audio narration, prime viewing areas, souvenirs, and snacks on board its boats.

“Although Liberty Island may be closed, Statue Cruises is ready to bring tourists up close with Lady Liberty, Ellis Island, and all the iconic sights and sounds of New York Harbor,” Mike Burke, chief operating officer of Statue Cruises, stated in a press release. “We are committed to delivering a memorable world-class experience for all of our guests, and we will continue to run Harbor Tours until Liberty Island is re-opened.”

Statue Cruises began its 60-minute tours on Oct. 1. The boats depart every 20 minutes between 9 a.m. and 4:40 p.m. daily from Battery Park in Lower Manhattan. There are also departures from Liberty State Park in Jersey City, N.J. every 45 minutes.

People who purchased tickets prior to the government shutdown will have their tickets honored.