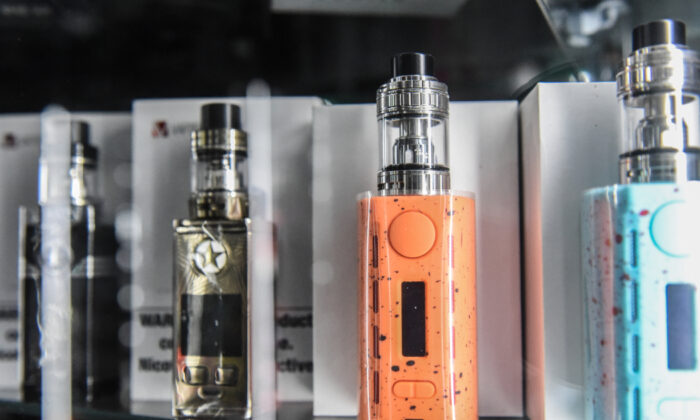 Vaping and e-cigarette products are displayed in a store in New York City on Dec. 19, 2019. (Stephanie Keith/Getty Images)
US News

The number of deaths caused by EVALI, the newly identified lung disease linked to vaping, has risen to 60, the U.S. Centers for Disease Control and Prevention (CDC) has said.

In a media release on Jan. 28 the CDC announced the updated number of hospitalized e-cigarette, or vaping, product use associated lung injury (EVALI) cases and deaths.

The CDC said that as of Jan. 21 60 deaths had been confirmed in 27 states and the District of Columbia, from Alabama to California. More deaths are still under investigation it added.

As of that same date, 2,711 cases of hospitalized EVALI or deaths were reported by all 50 states, the District of Columbia, as well as Puerto Rico and the U.S. Virgin Islands.

However, the CDC noted that emergency department visits related to e-cigarette products continue to decline after peaking in September 2019.

“National ED data and active case reporting from state health departments around the country show a sharp rise in symptoms or cases of EVALI in August 2019, a peak in September 2019, and a gradual, but persistent decline since then,” the CDC said in a statement.

It noted that there may be a number of reasons for the decline, including increased public awareness regarding the risks associated with THC product vaping, the removal of vitamin E acetate from some products, and law enforcement actions in regard to illicit products.

The CDC added that it continues to monitor and evaluate hospitalized cases or deaths related to EVALI in coordination with the FDA and states.

According to the CDC, vitamin E acetate, an oil chemical used to dilute THC, is “strongly linked” to the EVALI outbreak and “has been found in product samples tested by FDA and state laboratories and in patient lung fluid samples tested by CDC from geographically diverse states.

“Vitamin E acetate has not been found in the lung fluid of people that do not have EVALI,” it said.

“Vitamin E acetate should not be added to any e-cigarette, or vaping, products. Additionally, people should not add any other substances not intended by the manufacturer to products, including products purchased through retail establishments,” it added.

In updated guidance published earlier this month, the CDC said it is now focusing on vapes and vape products containing tetrahydrocannabinol (THC) from marijuana, as national and state data suggest they “are linked to most cases” of EVALI, and “play a major role in the outbreak.”

Tetrahydrocannabinol is the chemical responsible for marijuana’s psychological effects and has a similar structure to the brain chemical anandamide, allowing the body to recognize THC and alter normal brain communication, according to the National Institute on Drug Abuse (NIDA).

In a Twitter post on Jan. 27, CDC director Dr. Robert R. Redfield continued to warn against the use of e-cigarettes.

“If you use e-cigarette, or vaping, products, get medical care right away if you have symptoms like those reported in this outbreak, such as cough, shortness of breath, chest pain, nausea, vomiting, stomach pain, diarrhea, fever, chills, or weight loss,” he added.