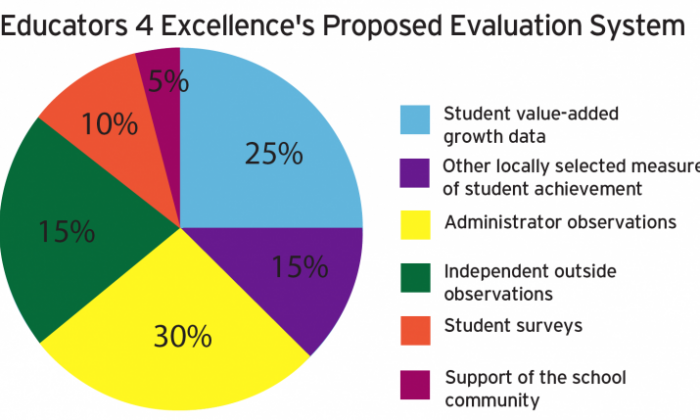 Teachers' greatest hopes and fears for a new evaluation system, according to the responses of approximately 100 attendees at an Educators 4 Excellence forum on Feb. 2. (Diana Hubert/The Epoch Times)
US

NEW YORK—The city’s Department of Education (DOE) and the teachers union are at a standstill in negotiations about teacher evaluations. Lots of money and many jobs are hanging in the balance.

The city won a federal Race to the Top grant of $700 million for a school reform plan that includes better teacher evaluations. The DOE and teachers union, the United Federation of Teachers (UFT), agreed on a model for evaluations in May 2010 but have been unable to agree on how to put it into practice.

Gov. Andrew Cuomo raised the stakes in his state budget address on Jan. 17. For the 2013–2014 school year, state aid increases depend on a new evaluation system being in place. Cuomo will step in with his own plan for teacher evaluation reform if the city can’t get its own in place by Jan. 17, 2013.

The city DOE and UFT are both happy about the state’s intervention, but the cost of not changing the system right now is high—about $600 million, said Cuomo’s education deputy, David Wakelyn, citing a New York Coalition for Achievement Now report.

The federal government granted the DOE money to help turn around 33 of the city’s lowest performing schools—but a condition of that grant was improved teacher evaluations.

“What we need to be better teachers is an evaluation system that gives us meaningful feedback,” said Daniel Mejias, a seventh-grade math teacher at M.S. 22 in the Bronx, one of the 33 schools in question. He sat on a panel with Wakelyn last week organized by Educators 4 Excellence (E4E), a teacher-led group that works to involve the voice of teachers in policy change.

Mejias talked about all the benefits—including additional teachers to reduce class sizes and refurbished computers into kids’ homes—that the grant money brought the school until the evaluations dispute froze the money flow.

In Mayor Michael Bloomberg’s State of the City address he said a school-based committee would evaluate teachers in the 33 schools, dismissing 50 percent of the teachers in each school. In the first year, that committee would include a principal or school leader, two UFT members, and two DOE representatives.

Disagreement on the appeals process for teachers who get an “unsatisfactory” rating, or u-rating, is the main hang-up in negotiations.

The DOE wants to keep the current system in place, in which the schools chancellor or his appointee has the final say. The UFT said hardly any appeals are granted under this system, which is evidence that it does not work.

In a letter to the state education commissioner in December, Chancellor Walcott responded, “If one considers the fact that less than 2 percent of all teachers are u-rated in a given year, it is unsurprising that the overwhelming majority of those would be upheld upon appeal.”

The UFT wants an independent arbitrator and negotiations have not been fruitful.

When asked about the governor’s evaluations plan during the panel discussion, Wakelyn said, “I can’t comment fully on that because it is an on-going conversation.”

He did say that he supports multiple measures, both scheduled and unannounced classroom visits for observation, student feedback on how their teachers are doing, and a system that takes into account the social issues faced by students in low-performing schools.

Rhena Jasey, a teacher at Equity Project Charter School in Washington Heights, said all teachers in each grade at her school are lumped together for evaluations. So, a fifth-grade art teacher is just as responsible for the overall progress of fifth-graders as a fifth-grade English teacher. The whole group of teachers gets a joint bonus if students perform well.

Wakelyn attended the event to hear what teachers have to say as he continues to shape the evaluations policy. The two greatest fears teachers expressed were that principals would not be properly trained to evaluate their staff and that the evaluations would be punitive rather than help teachers improve.

Part of the Race to the Top grant is dedicated to professional training for principals, and Wakelyn pointed out, “There’s a lot of anxiety on their end too, [though] you may not see it.” He hopes to keep the conversation conducive to improvement rather than just a way to target bad teachers for dismissal, though that is one of the results.

“[We are] putting an evaluation system into place that starts to say, ‘We’re not going to have 97 percent who are satisfactory anymore,'” said Wakelyn, “and some people who thought that they were above average are going to find out just this year that they’re average. … That creates a lot of nervousness among some folks.”