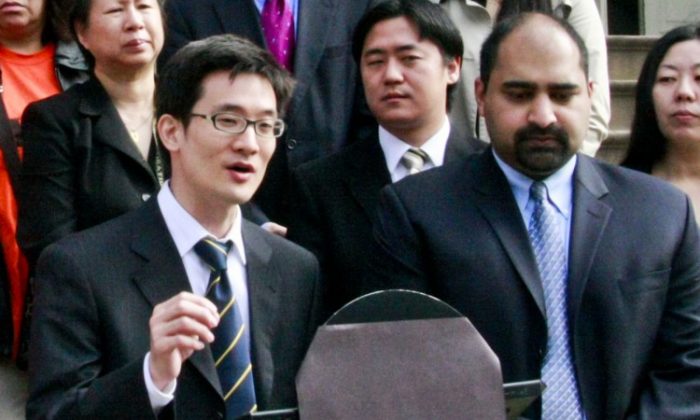 James Hong (L) of the Asian American Community Coalition on Redistricting and Democracy, and Jerry Vattamala (R), staff attorney for Asian America Legal Defense and Education Fund stand with minority organizations to call on the City Council and mayor-appointed redistricting committee to keep together groups of interest in redistricting from the steps of City Hall on Tuesday. (Aric Chen/The Epoch Times)
US

NEW YORK—On the state level, a redistricting frenzy is winding down, with some grumblings of discontent. On Monday, a three-judge federal court panel signed into law Congressional lines drawn by Judge Roanne Mann after the state Legislature failed to agree on a plan.

On Thursday, Gov. Andrew Cuomo signed into law state Assembly and Senate lines drawn by the Legislature. Government watchdog groups say the lines were gerrymandered, but the governor put in place an amendment intended to make the process more independent when it happens again in 2022.

Senate Democrats are challenging the creation of a 63rd Senate district, which they say was drawn to protect a Republican majority in the chamber.

The lines drawn by the Legislature must still be reviewed by the U.S. Department of Justice to ensure they meet Voting Rights Act standards that require groups of interest, such as racial minorities, to be kept together where possible.

As state redistricting winds down, city redistricting is gaining momentum. Susan Lerner of Common Cause New York, a good government watchdog group, said the City Council process is much fairer than the state level process and leaves far less room for gerrymandering.

City Council selects eight members for the redistricting committee and the mayor selects seven. Members are being selected now.

By the end of the summer, the committee will release its map and open up for public comment starting in September. The process, which happens every 10 years after the national census, will not go into effect until March 2013.

Minority advocates gathered on the steps of City Hall on Tuesday to call on city officials to keep together groups of interest.

Since the 2002 redistricting, the Asian-American population in New York City has grown 32 percent to more than 1 million people. Asian groups in the city are hoping for an increase from one Asian majority city council district (in Flushing, Queens) to three Asian majority districts (including Elmhurst, Queens; and Sunset Park, Brooklyn).