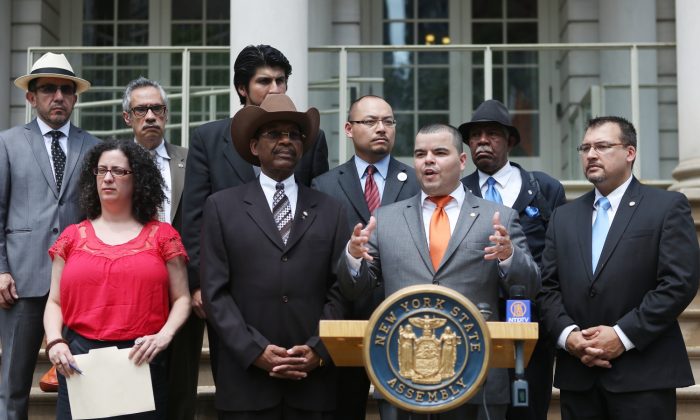 State Assemblyman Marcos A. Crespo speaks to the press on the steps of City Hall in Lower Manhattan on May 31. (Ivan Pentchoukov/The Epoch Times)
New York

NEW YORK—State lawmakers are looking to toughen existing laws and add new measures to address the problem of fraudulent immigration service companies. Such companies may advertise attorney services, yet the so-called attorneys do not have licenses, among other practices.

“Many immigrants looking for assistance with federal immigration matters have been defrauded and have lost their life savings trying to navigate our immigration system,” said State Assemblyman Marcos A. Crespo.

Crespo sponsored a bill in the state assembly, titled “Immigration Assistance Service Enforcement Act” which passed unanimously on May 29. Senate passage would have to come before June 20, and it is up to the senate leaders to bring the bill up for a vote.

Provisions in the bill would increase the maximum penalty for a fraudulent immigration assistance service provider from $7,500 to $10,000, and impose additional fines on those who commit immigration service fraud as part other schemes.

The bill would also establish a statewide public registry of non-attorney immigration assistance service providers and require each provider to register. Those that register will receive a certificate that can be displayed to verify legitimate non-attorney services.

“We need this now because there is immigration reform on the horizon,” said Crespo.

“I think the fines are too low right now, even if you compare it to other states,” said Valeria Treves, executive director of NICE. “I think we need more proactive enforcement to make sure that new laws, and laws that are already in the books are being enforced.”