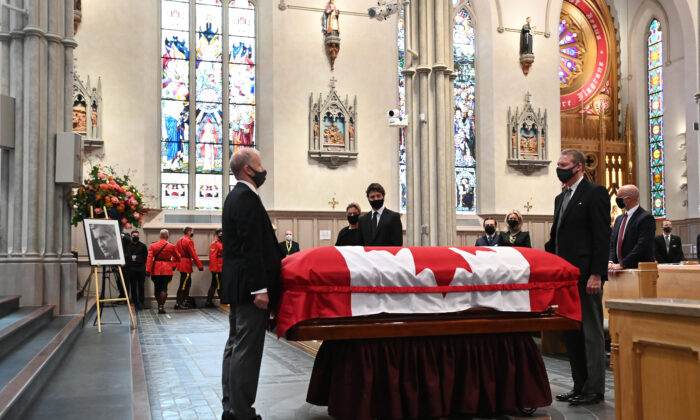 TORONTO—A state funeral was held on Tuesday for former Canadian Prime Minister John Turner who passed away last month at the age of 91.

Turner, who served the Canadian Prime Minister for just 11 weeks and led his Liberal Party to a massive electoral defeat in 1984, died in his Toronto home.

The funeral took place at the St. Michael’s Cathedral Basilica in Toronto and was attended in person by Prime Minister Justin Trudeau and his wife Sophie Trudeau.

“He knew we could rise to any challenge, and meet any moment—if we believed in one another and stood together,” Justin Trudeau said during the funeral. “Today, more than ever, we need people like John.”

Turner served as Canada’s 17th prime minister after winning the Liberal party leadership in 1984. He also served in the cabinets of prime ministers Lester B. Pearson and Pierre Trudeau.

Turner was a lawyer by training and served as finance minister from 1972 to 1975 but quit amid disagreements over policy with Pierre Trudeau. After serving as leader of the official opposition he retired from politics in 1993. He is survived by his wife Geills and four children.

Prior to his political life Turner was an accomplished athlete, qualifying for Canada’s 1948 Olympic team as a record-breaking track sprinter. He received a Rhodes scholarship after attending the University of British Columbia.

“John Turner believed in taking the high road,” Elizabeth Turner, his daughter, said, making reference to her father’s way of handling negative commentary from the media and his colleagues.

Reporting by By Mahad Arale