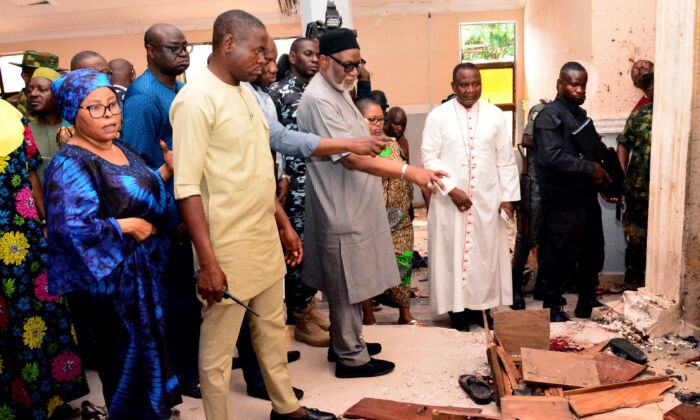 The terrorist attack on a Catholic church service in Owo, NIgeria, has led to criticism of the U.S State Department for downplaying the violence being aimed at Christians in the country. (AFP via Getty Images)
World

After the worst massacre of Catholic faithful in Nigeria’s history on June 5, rights advocates have rebuked the U.S. Department of State’s flawed conclusions in its annual religious freedom report for 2021.

“Instead of tongues of fire—bombs and firearms descended on worshippers in southwestern Ondo state [June 5] in a Pentecost Day massacre,” said government critic Emmanuel Ogebe, Special Council for Justice for Jos advocacy group based in the United States.

“The blood of the innocents be upon the Buhari regime and their American enablers,” Ogebe told The Epoch Times, referencing the brutal bombing and shooting of a Catholic congregation in Nigeria’s Ondo state on June 5.

Ogebe and other analysts have told The Epoch Times that for years the U.S. Department of State has explained most of the violence in the Middle Belt states as a consequence of disputes over land and water resources.

The latest report cites its nonprofit reporting contractors to support the same narrative.

The NGO reporting groups of the International Crisis Group, Mercy Corps, and the Armed Conflict Location and Event Data Project (ACLED) are cited repeatedly in the report to show that the greatest part of the loss of life some observers have called a “genocide against Christians” is actually not motivated by religious extremism.

“Rather than religious belief or animus, we find that intercommunal violence is largely driven by insecurity and a lack of trust between ethno-religious groups competing for political power and control over natural resources,” according to the ACLED report.

“According to the ICG [International Crisis Group], the causes of the northwest turmoil were complex and interrelated, saying that ‘Environmental degradation and rapid population growth have aggravated resource competition between herders and farmers. Disputes over land and water prompted both herders and farmers to form armed self-defense groups, fueling a cycle of retaliatory violence that has taken on a communal dimension.’”

The legal experts and State Department veterans interviewed by The Epoch Times denounced this narrative.

“The 2021 Religious Freedom Report conveys more information about the attitudes of the State Department officials who wrote and approved it than it does about the situation on the ground in Nigeria,” said former assistant secretary of state Robert Destro.

“Even senior Nigerian government officials fear that they will be kidnapped for ransom and murdered, and it is common knowledge that Nigeria’s federal police are either unwilling or unable to stop the violence.

“Can you imagine the uproar if the official state department narrative on Ukraine described that conflict as climate-change induced ‘communal violence’ and ‘resource competition’ between Russian soldiers and Ukrainian farmers?” Destro said to The Epoch Times.

“By downplaying the ethnic, religious, and economic dimensions of the carnage, the State Department diplomats are appeasing the Nigerian government, misleading Congress, and deluding themselves.”

“Nothing says the State Department report is arrant nonsense more than the glaring facts of the rivers of martyrs blood flowing in Nigeria in which the “see no genocide, hear no genocide, say no genocide” Anthony Blinken team are actively covering up in defiance of United States Commission on International Religious Freedom (USCIRF) and others,” Ogebe said.

The communal violence explanation surfaced in a June 6 Washington Post article on the church attack.

“While the attack was the first of its kind in Ondo state, it fits a larger pattern of communal violence across Nigeria,” according to Ebenezer Obadare, a senior fellow for African studies at the Council on Foreign Relations in Washington.

That observation drew the ire of Nina Shea, a human rights attorney and scholar at the Hudson Institute, who told The Epoch Times, “The Council on Foreign Relations expert insinuates that the attack on the church was somehow provoked. It was not.

“This was an innocent congregation in a peaceful area.

“This narrative of a communal violence is a well-worn tactic also used by the State Department to manipulate international opinion, avoid portraying Christians as victims of persecution and deflect attention from the real crisis of extremism infecting society and spreading throughout Nigeria.”

Critics also faulted State Department’s approach to remediating the violence, which emphasized peace-building grants to “narrow the gap between competing narratives,” according to the report.

“Nigeria doesn’t have a narrative problem, It has a security problem,” Destro told The Epoch Times.

“The [U.S.] Embassy is fundamentally misconceiving the nature of the problem, which is a breakdown in law enforcement,” Destro said.

“That’s like saying, ‘we need to bridge the gap between the victim of a rape and the narrative of the police department that didn’t show up,’” Destro added. “As long as the embassy sees its role as managing narratives, there will never be a reduction of violence.”

The Secretary of State’s removal of the listing of Nigeria as “a country of particular concern” last November has rankled myriad human rights organizations with engagement in Nigeria.

In the words of the report, “The Secretary of State determined that Nigeria did not meet the criteria to be designated as a Country of Particular Concern for engaging in, or tolerating, particularly severe violations of religious freedom—or as a Special Watch List country for engaging in, or tolerating, severe violations of religious freedom under the International Religious Freedom Act of 1998.”

The listing is reserved for nations that have serious problems with human rights abuses and the Nigerians were embarrassed by it, according to Destro.

A less onerous label for a nation is to be listed on “a special watch list,” which Nigerian didn’t get either, in spite of the fact that Nigeria in 2021 saw a 15 percent increase in violent deaths over the previous year.

“This was not a determination but a dictatorial decision that is neither supported by fact or law,” according to lawyer Ogebe.

“It is glaring to note that while Sudan was delisted in a prior year citing improvements in country conditions, the Blinken State Department is so incompetent and capricious, it doesn’t give reasons or cite Nigeria’s improvements in its reversal process.”

Ogebe went on to say: “Indeed with Sudan, the Pompeo-led State Department removed it from CPC to special watch list. Blinken on the other hand basically just disappeared Nigeria altogether in a mysterious magic trick.”